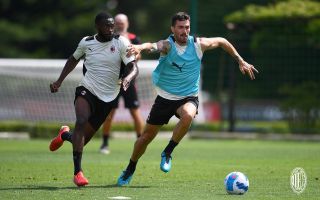 Milan have been training at Milanello since Thursday of last week and will take part in their first pre-season friendly tomorrow. On their official website, the Rossoneri published the schedule for the day.

There will be a training session in the morning and at 17:00 CEST, they will take on Serie C side Pro Sesto. The game will be played without any fans present but it will be streamed on the club’s official Youtube channel.

It would be a nice bonus ahead of the rest of the pre-season tour to get a convincing win to start it off. Milan will take on the likes of Juventus, Nice and Valencia this summer before the start of the season.

A few signings have already been brought in and the goal is to be ready for the season opener towards the end of August. Hopefully, the Rossoneri won’t disappoint the fans this upcoming campaign.

READ MORE: Defender will arrive in Milan this evening and sign contract tomorrow