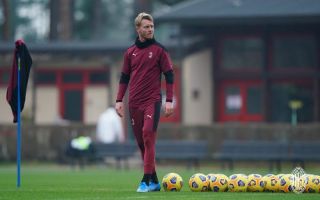 The schedule of the day as Milan prepare for crucial derby clash vs. Inter

After the 2-0 loss to Spezia and the 2-2 draw against Red Star, Milan will face their biggest test of the season tomorrow, taking on Inter. The Rossoneri may have won the first leg, but a lot has changed since.

Stefano Pioli’s side have struggled a bit as of late and the derby is an excellent opportunity to bounce back, but also a risk as a loss would be devastating. Not only would they lose sight of first place, but they would be at risk for top four as well.

As confirmed on the official website, Milan will have their final training session this morning and this will give Pioli some important indications ahead of the games. The main battle at the moment seems to be between Ante Rebic and Rafael Leao.

Then, at 2 pm, the manager will answer the questions of the media at the usual press conference. That is the schedule of the team on the eve of the derby, which is the biggest one in several years.