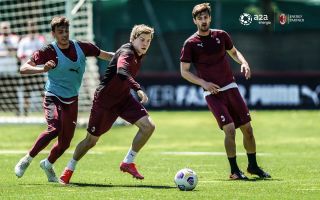 Milan are gearing up to take on Cagliari at San Siro tomorrow, hoping to secure their spot in the Champions League with a win. The last two games were extraordinary, but now a last push is needed for the Rossoneri.

Provided that Atalanta beat Genoa later today, Stefano Pioli’s men would need just a win to secure their spot in next season’s Champions League. They might not even need that, depending on the outcome of Juve’s game against Inter.

Either way, Pioli will speak to the media at 15:00 CEST tomorrow and answer the questions of the journalists, and there will most likely be many. The team will have a training session in the morning, as confirmed by the official website.

The game is scheduled for 20:45 CEST and it will be a very important game for Milan, no matter the other results. They still want to finish strong even if the important thing is to end up in the top four.

READ MORE: Milan have economic margin to improve the squad this summer – sale of quartet could help