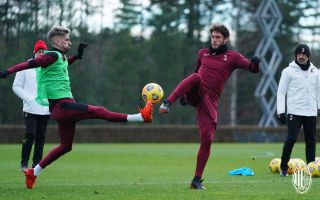 Milan have some pressure on their shoulders as Inter managed to beat Fiorentina last night, at least temporarily leapfrogging the Rossoneri in the standings. Having said that, the latter are clear favourites vs. Crotone.

Just one point separates the sides, as things stand, and Milan have a good opportunity to make it six out of six ahead of the derby on the 21st. Crotone on Sunday and then Spezia next weekend; two games they must win to compete for the Scudetto.

As reported by the Rossoneri’s official website, they will have a training session this morning to prepare for the game tomorrow. At 15:00 CET, Stefano Pioli will speak to the media at the usual press conference, and there won’t be a training afterwards.

We can expect the squad list to be announced towards the evening or perhaps even tomorrow morning. There shouldn’t be any surprises as Pioli, for once, will have most of his strongest XI available for the game.