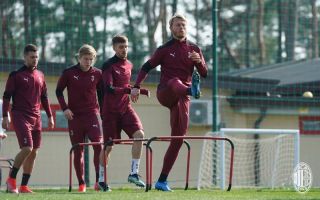 The schedule of the day as Milan prepare for tough away clash vs. Verona

Milan will be looking to redeem themselves tomorrow after what was a frustrating draw against Udinese mid-week. They very nearly didn’t get anything from the game, rescued by Franck Kessie in stoppage time.

On paper, Sunday’s encounter is even tougher as the Rossoneri will take on Hellas Verona way from home. The Bentegodi most recently beat Benevento by 3-0, but also managed a draw against Juventus last weekend.

As confirmed on Milan’s official website, Stefano Pioli will have his press conference a bit earlier than usual tomorrow, set to answers the questions of the media at 11:30 CET. The final training session will thus take place in the afternoon.

After the session, the team will travel to Verona for the important clash, which won’t be a walk in the park for them. Hopefully, they can forget about the mid-week clash and build on the performance they put in against Roma.