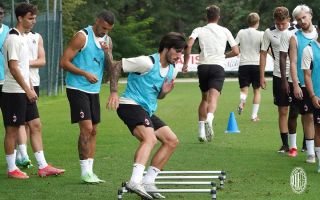 Milan are preparing for what will be their third friendly of the pre-season campaign, taking on Nice away from home this evening. After beating Pro Sesto and Modena, tonight’s game is expected to be a bit tougher.

The Rossoneri have started the pre-season well, albeit against weak opponents, and there have been many positive signs. Hopefully, we will see some more of that this evening although Nice are a tougher opponent.

The game is scheduled for 20:30 CEST and it will be played at Allianz Riviera, making it the first away clash of the pre-season. As reported by MilanNews, Milan will travel to the city in the morning by flight, leaving the airport at around 10:30 CEST.

They will continue preparations for the game upon arrival and you can read about the probable XI here. Most likely, both Mike Maignan and Olivier Giroud will feature for the Rossoneri tomorrow, which is exciting.