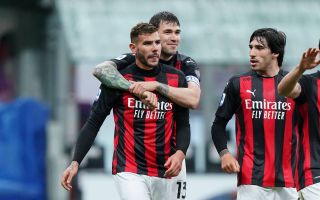 Theo Hernandez revealed his delight at returning to the scoresheet during the 2-0 win over Benevento tonight, and lifted the lid on his celebration.

Milan returned to winning ways at San Siro on Saturday night, beating relegation battlers Benevento to move temporarily second again. An early goal from Hakan Calhanoglu settled any nerves for Milan, and the lead was doubled on the hour mark though as Theo Hernandez seized a rebound chance.

It was bang on the hour mark when Milan did get the second goal that their dominance deserved and it was Theo who got on the scoresheet. A pass was slipped through to an unmarked Ibrahimovic in behind – who was being played onside by the left-back – and his shot was parried straight into the Frenchman’s path, leaving an easy chance to tuck into the bottom corner.

Hernandez was interviewed by DAZN at the end of the game, with his comments transcribed by MilanNews and translated below.

On returning to scoring: “We had a great game, I was looking for a goal for some time. Very happy with the victory and with the three points, we are growing.”

On the physical condition of the team: “Our goal is the Champions League, at times we seemed a bit tired but now we are fine and we want to reach our goal.”

On the celebration: “It’s a gesture for a friend of mine from Madrid.”