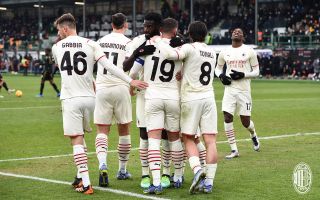 MN: Milan’s left side wreaks havoc in Venice – a display of Theo and Leao’s frightening ability

The power and potential in AC Milan’s left side was there for all to see during the 3-0 victory against Venezia at the Stadio Penzo yesterday afternoon.

As MilanNews writes, the Rossoneri opened the scoring after only two minutes of play as Rafael Leao got in behind and squared to Zlatan Ibrahimovic who had a tap-in, then Leao was the provider against for Theo Hernandez to make it 2-0 in the early stages of the second half, and the Frenchman got a brace from the penalty spot.

Theo certainly deserves his place on the front pages of the papers after his brace as he looks to have finally put his difficulties behind him after recovering from Covid, taking both of his goals well to become the first defender to score at least three braces in Milan’s Serie A history.

Meanwhile, Rafael Leao also followed up the goal he got as a substitute against the Giallorossi on Thursday night by setting two up, with a particularly sumptuous pass for the goal that made it 2-1.

Both the Frenchman and the Portuguese have pace, physical power, dribbling and an eye for goal, as well as an understanding and a chemistry together now too, which makes them a frightening opponent for any team that has to play Milan.

WATCH: Conti arrives at Sampdoria headquarters to sign contract ahead of Milan exit