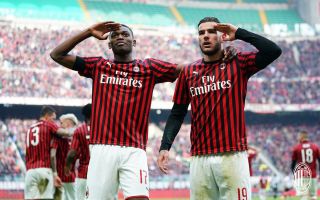 AC Milan used to be accused of being addicted to Zlatan Ibrahimovic’s goals and leadership on the field, but now they appear to rely on two new players.

La Gazzetta dello Sport writes how Rafael Leao and Theo Hernandez are demonstrated exponential growth, something which has been embellished by their respective call-ups to the Portuguese and French national team and by their start to 2022.

Milan find themselves with a devastating left flank, which must be armoured as soon as possible. Of the 55 Rossoneri goals so far this season, the duo have contributed 22 of them. Rafa and Theo arrived together two and a half years ago from Lille and Real Madrid, and considering they have a combined market value of around €100m now (at least), it is testament to Milan’s scouting and recruitment that they were bought for less than half.

Among the other things that bind them – such as their immense dribbling and explosive skill, direct nature and an eye for goal – is the expiration date of their contract. They are on deals that run until 2024, with a dialogue underway to extend the pair until 2026.

Leao currently earns €1.4m net per season and Milan have offered €4m plus bonuses with a distance between offer and demand of around €500k fixed. Theo earns €1.5m net and the club want to pay him the same as Leao’s offer, and again there is a slight distance.

These are two delicate situations that must be closed as soon as possible, as the Franck Kessie has taught Paolo Maldini and Ricky Massara, because after another year of similar growth, the demands could be much higher.