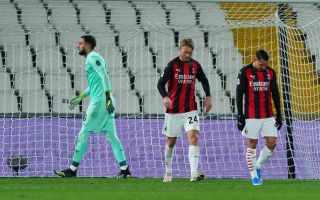 These are my thoughts: Unexpected success has inevitably made Milan fans greedy

We’re 22 games into the season and Milan are currently in second place, just one point behind their city rivals Inter ahead of what will be the biggest derby in years this weekend. Yet, the feeling is it could have been better.

The Rossoneri were battered in the first half of the 2019/20 season, poised by a seemingly non-existent project conducted by Marco Giampolo, as well as the resulting managerial switch to Stefano Pioli. What had become the new normal for Milan just repeated itself, with yet another manager replaced.

But over a year since that took place, the team finds itself in one of the best positions since the 2011/12 season. Without going into much detail about what changed after Pioli came in, it’s clear that the club has achieved the effect of a revamp without actually doing that much, rather focusing on targeted solutions.

It’s the success that Milan fans had been dreaming of, reminiscing of the glory days and what once was for this historic and great club. And after what seemed like an eternity, they are back on the path to success and the conclusion to the 2019/20 season certainly alluded to this.

And now, with 22 games played, not just Milan but also their cousins are back at the top of Italian football. And the upcoming derby – scheduled for Sunday afternoon – not only brings back great memories but also gives us hope for a future that indeed could be a lot more favourable for the two clubs. If you fancy a flutter on the game, check offers from Unibet.

Yet, as mentioned, the feeling is that the present situation could have been even better, a utopia of sorts based on the expectations going into the season. Everyone will probably agree that, on a whole, Milan will have to continue like this in order to achieve continuous success on a long-term basis.

However, with this recent success – as is only natural for us – the expectations that have been exceeded to such a huge extent have been normalised. In fact, after one loss (albeit a shocking one) the Milan players are facing a pressure they probably never have experienced before.

Here you are, a relatively young player that, together with a great squad and team mentality, has given the fans more than they could have wished for ahead of the season. But even so, as the season goes on and results continue to arrive, the new normal emerges and the judgement is distorted.

As said, this comes naturally to us as human beings; why settle for a piece when you can have the entire cake? Well, just as you might want to decide against eating an entire cake for health reasons, there are factors to be considered in sports as well and these are important not to forget.

The thing with distorted expectations is that you could head down a negative path, a harmless circle if you like, where logical thinking is taken out of the equation in the pursuit of your dream. And in Milan’s case, of course, the Scudetto is the dream that would be a bonus to what is the real goal.

The real goal being Champions League qualification, which would enable the club to return to its glory days and invest more just like the other top clubs. This has to remain the priority for very obvious reasons, starting with the financial impact, exposure and the subsequent effects that follow.

That is not to say that Milan shouldn’t dream and fight for the Scudetto, but they can’t lose sight of what is the long-term goal of the club’s project. If too much energy is put into winning the league, there will inevitably be negative effects if things don’t always go their way.

And these negative effects, such as a dip in form, could be fatal for a club in such a crucial part of the season. It would be disastrous to miss out on a top-four finish and that is, unfortunately, a possibility given how tight the race is. Though it remains unlikely, therefore, it can’t be ignored.

Anyone can alter their goals if the initial ones are being exceeded far by imagination, but it’s arguably a dangerous game to play and that can be seen through the Milan management’s statements on the matter. They have always been and remain very clear in this regard: a top-four finish.

While keeping level-headed is important, for all the reasons touched on, hope is what drives us, especially in sport. There is absolutely nothing wrong with wanting to fight for the Scudetto, therefore, but the danger comes when fans start criticising the team for one misstep.

The players will inevitably be aware of this themselves and instead, they need support more than anything else, especially in the middle of a season like this one. Perhaps the lesson-learned from this unexpected success is that nothing should be taken for granted, a couple of poor results and you could be at risk.

At the weekend, all it took was one loss, I repeat one, to change the discourse entirely around the team and while this is somewhat perfectly natural, this is not the time to get greedy. After all, it remains in the hands of the players and all we can do at this point is support them, they have done enough to be given a break.