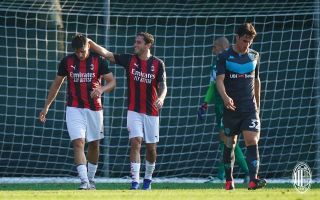 Milan concluded their preseason preparations with a 3-1 victory over Brescia thanks to goals from Frank Kessie, Lorenzo Colombo and Samu Castillejo.

The Rossoneri easily overcame their Serie B opponents by dominating the majority of the game and leaving no space for Brescia players.

Some players stood up more than other but overall, it was an impressive display from Pioli’s men. Below are three takeaways from the game…

Kessie is the most consistent player

Frank Kessie has been performing at his best for a couple of months now. The most impressive aspect of his game is that he always brings the same amount of intensity every time he steps on the pitch, which has allowed Milan to dominate the midfield in most of the games these past months.

Today was another example of how consistent Kessie has been ever since moving to a double pivot, scoring the opening goal and having a big influence on the game.

Colombo has what it takes

Lorenzo Colombo scored for the third friendly game in a row, and the 18 year-old keeps proving his worth with yet another incredible display.

His physicality causes a lot of problems for defenders as it makes him very difficult to mark. The Italian also has a flair for goal and does not miss an opportunity to take advantage of defensive weakness as he proved today with a few interceptions and a goal in the second half.

With Milan potentially playing three competitions this season, Colombo will have to cover for Zlatan from time to time and from what he has shown during these friendlies, he definitely has what it takes.

Pioli and his men have been unstoppable since the restart of the season, winning most of their remaining games and finishing the season on a very high note.

While the preseason friendly games are mostly about regaining fitness, Milan are still showing the same amount of intensity and focus, scoring at least three goals in every game.

With the season just around the corner, it was important for the Rossoneri to show that they were ready to continue their good run of form and a comfortable victory over Brescia in the final pre-season game is definitely what was needed.