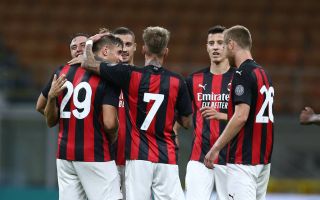 AC Milan played their second preseason friendly against Monza, winning the game 4-1 with Maldini, Kalulu and Colombo all scoring their first goal for the senior team.

The game started well for the Rossoneri as Calabria scored a wonderful goal from long range to open the scoring just six minutes in the game. The right-back had a solid display against Monza making a statement that he is willing to fight for his spot in the team amid all the transfer rumours.

Daniel Maldini started and looked more confident throughout the game, scoring a lovely goal toward the end of the first half, getting his first senior goal for the club.

It was the night of the debut goals as Kalulu scored a lovely volley to make it 3-1 to the Rossoneri after coming on after the hour mark. It was yet another spectacular long range shot by Colombo that gave him his first senior goal after a wonderful record for the Primavera.

Here are three thing we saw in the game…

While a game like this cannot be a huge reference point it is only fair to mention that Calabria had a solid game. The Italian opened the scoring with a lovely goal and looked good the whole game.

He showed good pace and movement going forward and was not afraid to try a more direct forward pass. Towards the end he acted as a centre-back after Kalulu’s introduction, but he looked better than both Duarte and Bellodi.

😍 Calabria gives Milan the lead with a scorcher!

Obviously Calabria was shaky last season and has a lot to prove, but with the overall performances we have seen between him and Conti throughout the past year it really feels like the Primavera graduate is the man who should be sticking around.

With all the key players on international duty, the likes of Maldini, Roback, Colombo and even Calabria and Paqueta to an extent have had some chances to show us what they have to offer.

Firstly, Maldini growing more and more confident was a joy to watch and hopefully his debut goal is only the first of many. Roback on the other hand is only 17 years of age but has shown great potential in the two friendlies we’ve had so far and is looking like great signing right now.

Another youngster coming from the Primavera, Colombo just needed a couple of minutes to score an absolute screamer from far out. The striker has a great record for the Primavera and possesses great physical attributes, suggesting he could be a deputy to Ibra.

👌 It doesn't get much better than that from Colombo.

On the flip side, Paqueta and Calabria are also worth mentioning as both are supposedly on the market if anyone is willing to present the right offer. We already spoke about the Italian, but it is worth mentioning that Paqueta has been doing well in preseason even if he failed to score or get an assist today.

His touches looked good and he had a few lovely through passes. We all know his qualities, and if he finds consistency he may earn his stay at the club.

While Kjaer is off with Denmark and Romagnoli is injured, we have seen that the centre-back is indeed a trouble spot at the moment as it does not have enough quality depth.

Duarte was shaky and Bellodi did not impress in particular. While Musacchio is injured, his display have not been convincing either. That leaves Pioli with only Gabbia on the sidelines, but even he is still young and has plenty of room for improvement.

With Milan playing in Serie A, Coppa Italia and Europa League they will surely need some more depth in that department if they don’t want to be caught off-guard.