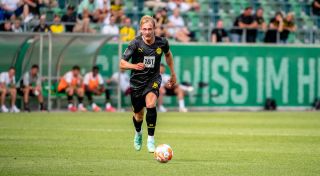 AC Milan are focusing on Julian Brandt of Borussia Dortmund to reinforce the playmaker position, according to a report.

According to TMW, the German attacking midfielder is out of favour after an anonymous season at Borussia Dortmund under the guidance of coach Lucien Favre. However, with the arrival of Marco Rose as the new head coach, the cards on the table could change.

Brandt would like to stay and play for his spot in the starting XI at least for the moment, but with the start of the Bundesliga approaching on 14-15 August, the situation could change. The player’s valuation is around €20m in total, while Milan would like a loan with option to buy formula.

More developments are expected on Brandt’s situation in the coming days, especially if Milan were to push hard in order to try and sign the former Bayer Leverkusen star. A lot will depend on Rose’s intentions, it seems.

READ MORE: Milan looking to sell four players and raise funds but there is an obstacle