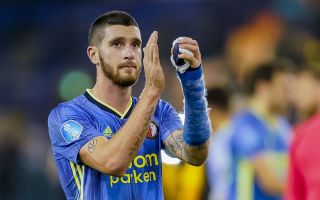 TMW: Milan retain interest in €20m-rated Feyenoord defender – what a pursuit depends on

AC Milan have reignited their interest in signing Feyenoord centre-back Marco Senesi this summer, according to a report.

As written by TMW, Milan are once again closely following the left-footed central defender. The 24-year-old Argentine was linked to Milan last summer and now the Rossoneri are talking about him again as a possible reinforcement ahead of next season.

The valuation that the Dutch club have in mind is around the €20m mark, but his eventual arrival would be linked both to qualification for the next edition of the Champions League and to the possible permanent signing of Fikayo Tomori from Chelsea.

It is worth noting though that Senesi is just the latest centre-back to be linked with the Rossoneri, which is interesting given the uncertain future surrounding Alessio Romagnoli, the club captain who is under contract until 2022 with no signs of a renewal being imminent at present.

READ MORE: ‘Not gonna forgive this’, ‘Europa once again’ – Some Milan fans fuming at Cagliari draw on social media