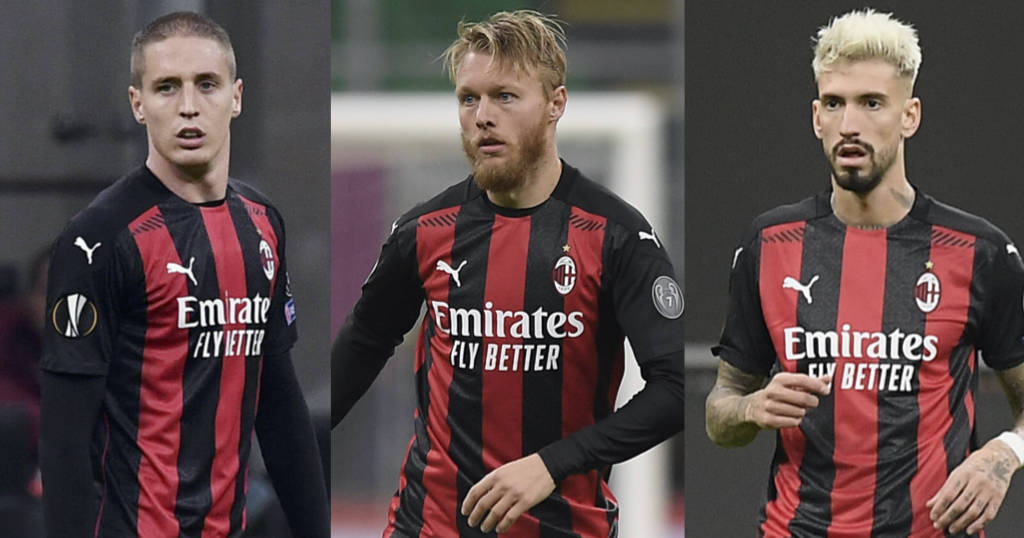 To keep, sign or sell: Five contract situations that Milan will soon have to resolve

There have been some great decisions made by the AC Milan hierarchy in recent times. Elliott Management have managed to save over 32% on the overall wage bill since they took control of the club back in 2018.

This has allowed the club to somewhat streamline their financials and help the club propel itself in its aims of signing young talent on cheaper wages to then develop them later down the line.

Below are a few players that the club must make a decision on sooner rather than later, as all are either on deals which expire in the next couple of seasons or are at a crossroads in their careers.

We take a look at the situation of some contentious players…

A once very promising right-back that seemed to have the ingredients of becoming a mainstay in the Milan squad. However, almost endless injuries and the need to find replacements in a position we haven’t had a solid starter in for some time – until Calabria’s recent form – means Conti has struggled to ever really find any solid game time.

Although still fairly young (26) Conti’s lack of development and affinity to the medical department at Milanello makes it hard to keep this player on the books when he seems surplus to requirements.

His somewhat modest €2m a season net salary (all salaries quoted are from La Gazzetta dello Sport) is not ‘big bucks’ in today’s football, but it is unnecessary spending that Milan could do with saving and putting towards more high-profile players in positions we need.

Given his contract runs until 2022, it would be wise to sell by next summer at the latest, to recoup some of the investment while the player has some value rather than letting him rot away the remaining 19 months of his deal.

However, as time went on, it became apparent the Serie A didn’t suit him too well. Moreover, he has become another injury prone player that lost favour with multiple managers since joining the club.

With his contract expiring in June 2021, Milan should try and sell before it’s too late, or just accept that he will no longer be at the club after this season ends. Another €2m wage that could be put towards a higher profile target.

To say that this man has been immense for us since his arrival would be an understatement. Since Kjaer’s arrival he has been nothing short of integral to Milan’s defence and also leadership from the back.

Although not young by any means, with a contract only until 2022, Milan should really think about renewing a player that will certainly be good for the next few seasons at the very least, especially as he has adapted back to the Serie A so well.

However, a worrying thing is that he doesn’t show signs of improving despite his relatively tender age of 25, and his often-inconsistent performances highlight he is not a starter level right winger for Milan.

It is not new information that we are seeking a quality, consistent, and goal-contributing right sided midfielder. It is also apparent that he isn’t really good enough as a bench option either.

He did score in our most recent Europa League games against Lille and Celtic, and also against Sampdoria on Sunday, Samu’s statistics are far from anything to shout about overall, and Saelemaekers seems the much more impactful payer with plenty of room to grow.

Castilleko just doesn’t really have a place, and with many Spanish clubs seemingly interested should we sell, and his contract not expiring until 2023, Milan should really look to put Samu in the shop window to help generate some funds for use in other areas.

The elephant in the room. Most readers will be more than aware (and possibly a little fed up) of Calhanoglu’s contract renewal saga.

We wanted to discuss if even trying to renew is a good idea, and perhaps whether letting him go would be the best thing moving forward. The Turkish playmaker has been a mainstay at Milan for some time now since he joined from Bayer Leverkusen back in 2017.

To say he has been inconsistent would be simplistic. Obviously, he was and has been one of the most talented players at the club even when Milan were going through the very bad times of a few years ago, there was always hope with Calhanoglu as he always had the ability to produce goals or assists.

🎯 We'll never get tired of this from Hakan Çalhanoğlu…pic.twitter.com/i25PVB7Q5W

His performances in what has been our greatest resurgence in form for the last 10 years during the pre and post-lockdown games was brilliant. It seemed like the gamble the management took on the player was finally starting to pay off.

However, fast-forward to today and it seems Calhanoglu himself has become very aware of his new-found form, demanding double his current €2.5m net per season as per all the major outlets.

It seems that Milan don’t agree that the raise is justified, as such this ongoing saga is edging closer and closer down the route of non-renewal. However, this is not such a bad thing, as although Milan risk losing a fee on the player as his contract expires next summer, he has also shown he is replaceable.

Moreover, he has also shown his true nature in wanting the money more than the opportunity to continue to prove himself in the red and black. As such, it may not be such a bad idea to allow him to go whilst funnelling the saved funds and budget we have for January to go towards a younger more hungry replacement.