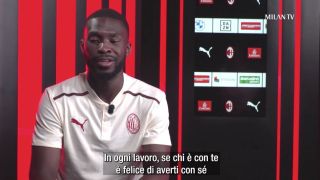 Tomori opens up on joining Milan from Chelsea, his goal vs. Juventus and what Giroud will bring

AC Milan defender Fikayo Tomori has described the feeling of learning the club were buying him outright, and he also spared a few words on Olivier Giroud’s arrival.

Tomori was signed from Chelsea for a fee widely reported to be in the €28m region, as that is the option to buy that Milan managed to include as part of the initial season-long loan deal. He basically stepped straight into the action having had a hard time with the Blues in terms of playing time, making an instant impact at San Siro.

Towards the end of the campaign he became one of the undroppable players from the starting XI forming a formidable partnership with Simon Kjaer, and in the end it was an absolute no-brainer for Milan to pay the money and sign him outright.

The 23-year-old spoke during an interview with Milan TV about a number of different topics, with his comments transcribed by PianetaMilan and translated below.

On being bought by Milan: “It’s a good feeling, in every job, if it’s someone who is happy to have you with you. You feel part of the team, of the group you belong to. This helps you to perform better. Here I feel good, I am happy. I feel everyone’s trust and this makes me trust myself, allowing me to perform at my best and to have further motivations.”

On his attitude in the defensive phase: “As a defender I always want to keep a clean sheet. This increases the team’s chances of winning games. At the end of last season the five ‘clean sheets’ we kept helped us to reach the Champions League and finish in second place. Up front we can always score, in fact that’s how it went and we managed to qualify.”

On the meaning of having become a permanent Milan player: “In recent years I have often been on loan and often at the beginning of the season it has not been easy. Being able to start training together with the team and with a stable situation will certainly be an advantage. I’m fine here and can’t wait to get started.”

On the Serie A fixture list: “In Serie A there are many excellent teams and they all have to be played twice. It doesn’t matter when you meet them, but when you do, you have to be ready. That’s why we work hard during the preparation: to be ready.

“When the matches start, we want to be ready and we hope to succeed. Facing Juventus, Inter, Roma, all the big players, Atalanta, is never easy and it doesn’t matter when you meet them.”

On Olivier Giroud’s arrival at Milan: “Olivier is a nice person, who helps and encourages everyone, the youngest and the other team-mates. He is a guy who makes up a group, a true professional, and everyone knows his qualities.

“He won the Champions League, the World Cup, he has been playing with the French national team for a very long time. He has also won the league in France: he has won a lot and having someone like him is fantastic. I am sure he will do very well here.”

On the upcoming Champions League involvement: “I am very excited, Milan have a great tradition in this competition. There is a special relationship between AC Milan and the Champions League. And I can’t wait to play in a San Siro full of fans, something that unfortunately I have not yet been able to experience.

“On vacation many people told me how full San Siro is in a Champions League evening. Who would have thought they could experience it one day? And [they told me] that Milan’s season was very positive.”