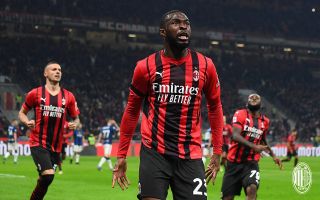 Tomori responds to our tweet about him claiming equaliser vs. Inter: “I’m happy with this”

AC Milan defender Fikayo Tomori reacted to our tweet after last night’s derby draw against Inter, revealing he is happy to take credit for the equaliser.

Milan fell behind early on during the Derby della Madonnina against their bitter rivals as Hakan Calhanoglu won a penalty and converted it, but the Rossoneri were level seven minutes later as a Sandro Tonali free-kick was diverted into the bottom corner.

Tomori certainly celebrated as if he was the one who planted a firm header on the cross but replays showed it was Stefan de Vrij who actually put the ball into his own net. Nevertheless, the Englishman wheeled away and showed great emotion.

We posted a couple of pictures from the incident with the caption: “We can pretend it was yours.” Tomori then replied to the tweet jokingly, stating: “I’m happy with this.”

In the end that would be the goal that earned Milan a draw against the Nerazzurri, keeping them joint-top and seven points above their city rivals.