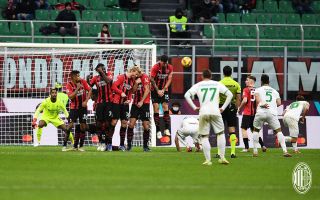 Stefano Pioli is not worried about AC Milan’s two consecutive league defeats, but he has admitted that he is not happy with the fact they let in seven goals during the losses.

MilanNews reports how after the match against the Neroverdi, the Rossoneri coach explained his thoughts on the result and in particular the defensive performance: “Defensively, there is something to fix: when I say that seven goals are too many it’s like saying I’m worried. It’s an unexpected slowdown. In the last few games we’ve all done a little bit less. We want different results with different performances, immediately.”

The good news for Pioli is that on Wednesday against Genoa there will be the return of Fikayo Tomori, who missed the matches against Fiorentina, Atletico Madrid and Sassuolo due to a hip problem, and during that run of three games – especially the two league matches – it became clear that the Englishman is indispensable.

With Romagnoli disqualified after yesterday’s red card, it is likely that Tomori will have Simon Kjaer at his side, with a clean sheet very much needed. However, in order for it to be a smooth return a completely different performance from the one seen in Florence and yesterday against Sassuolo is needed from those around Tomori.

READ MORE: Pellegatti analyses Milan’s ‘total nightmare’ against Sassuolo – “There is something wrong”