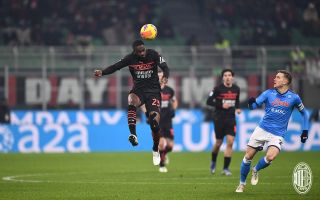 MN: Centre-back pairing of Tomori and Romagnoli one of few bright spots in Napoli loss

There wasn’t much to be positive about during last night’s game between AC Milan and Napoli, but the performances from the centre-back pairing were good.

As MilanNews writes, the importance of finding a steady and reliable pairing given that Simon Kjaer is out injured for the rest of the season is a must, and with only Fikayo Tomori, Alessio Romagnoli and Matteo Gabbia as the natural centre-back options it is important that they all step up.

The 1-0 defeat against Napoli left a sour feeling given the controversy of the Franck Kessie disallowed goal and the failure overall to exploit certain opportunities, but the defensive pairing of Tomori-Romagnoli did not hurt.

The newspapers this morning gave 6.5 and 7s for Englishman and between 6 and 6.5s for the captain as they were good at preventing dangerous situations, they were attentive to attacking movements and above all they kept a big unit like Andrea Petagna mostly out of the game.

This season Tomori has 1477 minutes on the pitch, while Romagnoli has 919 minutes showing that they are reliable and the go-to duo in Kjaer’s absence. Even on Eljif Elmas’ goal neither are to blame as he came from an area ​​Sandro Tonali and Zlatan Ibrahimovic should have had covered.