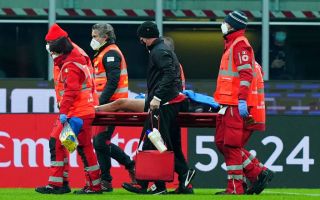 There was a slight sour note from Milan’s 2-0 win over Torino as Stefano Pioli potentially has two more injuries to deal with.

There would be more injury concern for Pioli to endure as Sandro Tonali and Brahim Diaz both came off in the second half, with the former having been injured in an incident which bizarrely saw a penalty awarded for Torino before being overturned.

Meanwhile, Pioli opted to make a change on the hour mark as Hakan Calhanoglu entered in place of Brahim Diaz, and news then filtered through that the Spaniard had in fact gone off injured.

DAZN gave an update during their live broadcast about the condition of the two players, and confirmed that Brahim Diaz went off because he was limping and couldn’t even put his foot down. They added that Tonali suffered heavy bruising after being kicked by Verdi.

READ MORE: Leao and Kessie net as Rossoneri put the pressure back on Inter