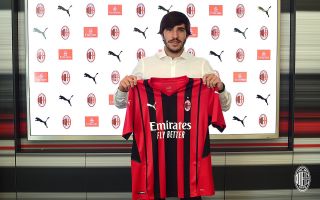 Sandro Tonali has revealed his delight at becoming an official AC Milan player, insisting that it was the best solution for all parties.

On their official website, Milan confirmed that they have secured the 21-year-old Italian midfielder on a permanent basis. A five-year contract has been signed and the Rossoneri can finally put the story to bed after several weeks of negotiations with his club Brescia.

Antonio Vitiello of MilanNews reported that Tonali has accepted a reduction of his salary in order to play for Milan permanently, with the deal now becoming a €10m paid loan with a €7m fee paid to make the move permanent plus bonuses, and Giacomo Olzer going the other way as per of the deal.

Tonali was interviewed exclusively by Milan TV after completing the move, with his comments transcribed by MilanNews and translated below.

On the permanent transfer: “Without will this transfer was really difficult, I am happy for me and Milan and for the people who made sure that everything went well. It ended for the best.”

On his first year in the Rossoneri: “I am satisfied, playing 37 games for Milan is like playing 100 in another team. It is a great thing. My growth will be this year, I’m satisfied but we aim to do better and better.”

What did you miss? “One thing about the things that I missed is consistency, as well as the whole team. It is the hardest thing in football. We started very strong, then we slowed down and then we went back to pushing hard. There is no more time to wait or to have some alibi for this season. We are and I am ready.”

On the Champions League: “We will have to do more than what we have done so far. We will all have to be together and all row in one direction, this is the key thing. The Champions is always the Champions, everyone will give 150%.

“I grew up both on and off the pitch, it’s an important thing in these moments of life and career. I am more mature in many ways. We are happy that the coach is with us, he knows us well, we love him and he is our captain.”

Who did you bond with the most? “I forged a bond with Daniel Maldini and Colombo who are almost my age, but also with the other Italians in the squad. We are a very compact group. There is no closest friendship.”

On Kjaer: “Simon is more captain off the pitch than on, he’s our dad. He treats us like children.”

On Maldini: “He always has an effect, you see it with a different eye. He is a legend, not just any person, you know he loves you and it is already a pleasure to meet him. I let you imagine seeing him every day and talking to him.”

On Italy: “It is difficult to think about the future with one word, let’s see how it will go. Let’s see if I can deserve such a heavy shirt. I wish the Azzurri very good luck, they were fantastic. Forza Italia.”