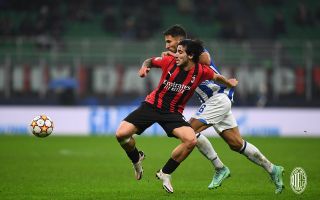 One player who can hold his head high after last night’s draw against Porto is Sandro Tonali, as the midfielder put in another excellent performance.

MilanNews writes how Tonali is now enjoying the trust of head coach Stefano Pioli, the love of the San Siro crowd and the appreciation of his team-mates as he continues his constant growth as a player with the focus and determination of someone who is destined for the top.

Tonali remained calm even when the team struggled in the first 45 minutes, wrestling back some of the control in the midfield. He showed his ability to not only recover balls on the defensive end but also the advance with it, even finding himself pushing up as a winger and a playmaker at times to try and get something going on the attacking side.

A small problem forced him to come off in the second half, but it will not keep him out of the derby, where he wants to start against the team he could have joined and make them feel even more regret, especially if that means winning with his boyhood club in the biggest league game of the season.