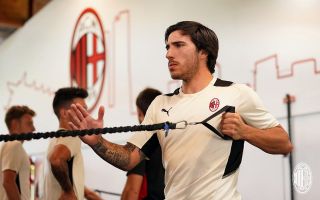 AC Milan midfielder Sandro Tonali has reflected on his ‘very complicated’ first year at the club and revealed why he feels he will do better this season.

It was confirmed earlier in the month that Tonali’s initial loan spell from Brescia had been turned into a permanent deal. The Rossoneri did not use the pre-agreed €15m option to buy but instead negotiated a cheaper fee and sent Giacomo Olzer to the Lombardy club as a counterpart.

As per multiple reports, this is mainly because of Tonali’s struggles to adapt in the first season and some apprehension about potentially paying €35m (€10m loan, €15m option and €10m bonuses) for the Italian midfielder. However, they got a deal over the line and now he is here to stay.

Tonali spoke at length about making his move to Milan a permanent one during an interview with La Gazzetta dello Sport, beginning by talking about a discussion he had with Paolo Maldini after signing his contract.

“It wasn’t my best season, but it was a very complicated year. I tested positive for COVID at the beginning of the season and it took a while to get back in shape. This season will be a different story, I know where I must improve,” he said (via Football Italia).

“I have more experience now, on and off the pitch, I know my team-mates and the coach. I thank the club, because it has bet on me twice. I don’t like the proclamations, but I can assure you that I will do everything to prove to be a player worthy of Milan.”