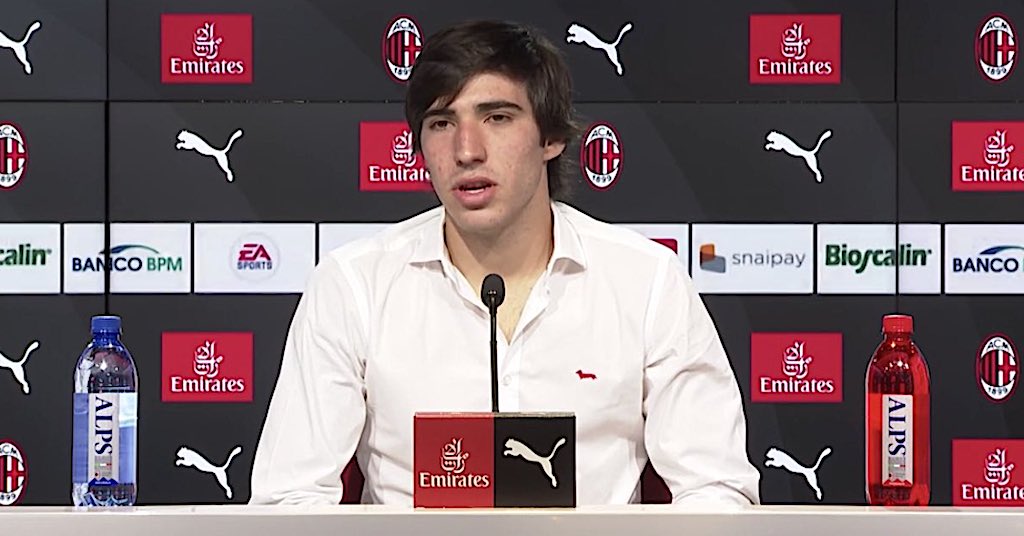 Tonali: “When I realised there was an opportunity to go to Milan I closed the doors to everyone”

New AC Milan signing Sandro Tonali has insisted that once he learned of the Rossoneri’s interest, his heart and mind were made up.

Last week it was confirmed that Milan had completed a deal with Brescia to sign the 20-year-old talent on an initial loan with option to buy, beating competition from city rivals Inter.

It represents a statement signing for the Elliott Management era and by director duo Paolo Maldini and Ricky Massara, with a lot of media attention generated by the coup.

Tonali made his debut for the club during Saturday evening’s friendly against his former side Brescia at Milanello, almost scoring in a positive 18-minute cameo.

The Italy international spoke in front of the media at his official presentation on Monday afternoon, with his comments transcribed by MilanNews.

Where does your passion for Milan come from?

“It starts from Sant’Angelo, the colours are Rossoneri, my first team was red and black, we are almost all AC Milan fans there, even my father passed on this passion to me.”

What was the first thing Pioli conveyed to you?

“The coach gave me an extra charge, he explained to me in detail what we will have to face, I will be ready.”

What happened with Brescia president Cellino?

“It was the shirt I wanted to wear for a long time, I have a good relationship with Cellino, he understands football and he understood me a lot. From day one he told me that I should make my choices, he kept his word. I asked to the president if he could make this effort towards me, he came to meet me, he proved to be a super person.

“Cellino told me to stay as I am, thinking of playing for Brescia again. This is one of the tips that I will follow a lot, I respect him and we have a very good relationship.”

What do you think of the media pressure?

“I never turn on the TV, I just focused on my phone, the field and home. I plug my ears.”

On Thursday’s game against Shamrock Rovers: “We are ready, in an official match it will be very different, there will be even more desire to show the world.”

Is he better in a two or three-man midfield?

“The formation is the last thing, the important thing is to stay on the pitch. You always enter the field to give your best.

“The first season in Serie B with Brescia I played in a two-man midfield. With three the game passes through you more because you are the only half. With two it is easier, I remember the movements, they are more connected with the team-mate, you have to work a lot with him but I’m used to it.”

The negotiation with Milan?

“Beautiful, when I realised there was an opportunity to go to Milan I closed the doors to everyone. I had to go to Milan by force. That was my thought and that was it. The first time I met the directors were fantastic, working together is fantastic.”

Was the negotiation with Inter true?

“My agent spoke to them a lot, leaving me out of this business to make sure I had a free head. There was a lot of trust between him and me. As soon as I learned about Milan, he knew about my passion and we talked to each other.”

Did you choose the 8 because of Gattuso?

“He was an idol of mine, the 8 was free, Gattuso was my idol and still is as a coach. I chose that number because it has various meanings in my life.”

What is the recipe for returning to the Champions League?

“We have to train as we are doing, training is the key. The best thing is to go game by game and give everything every time.”

How has it been working with Maldini?

“At the beginning it was a big thing to start working with Maldini, a beautiful thing.”

Which old AC Milan game would you like to play?

“The Champions League finals, but I was at the stadium for Milan-Chievo, with Seedorf’s goal at the end. It was a bad game but with great emotions.”

What impact did Ibrahimovic have on you?

“He is one of those that struck me the most, I admired him at Milan. It is wonderful to be able to play with him, he is an idol, he can carry the whole of Milan on his shoulders and lead them to victory. He is a person to be taken as example”.

“You have to win game by game, don’t think about 6/8 months. Working, building brick by brick, building our house that will be our fort.”

On his fitness: “We are working both physically and mentally, I was stopped for a long time, we’re working on it, I’m almost at 100%, very little is missing.”

Is there talk of the Champions League in the dressing room?