The Stadio Giuseppe Meazza, more commonly known as The San Siro is home to one of the most fierce rivalries in club football. When Milan face city-rivals Inter Milan, fireworks are the only guarantee.

With this season’s second Derby Della Madonnina fast approaching, we wanted to take a look back at the biggest victories for the Rossoneri in this match up. Incredible goals, Legendary players and a historic ground combine to create this fantastic display of football which truly bring to life the meaning of the beautiful game.

The 2003-2004 season saw Milan not only beat Inter but also saw them win the league. Finishing the season with only two losses and 82 points, this Milan side was no slouch. Goals from three fan favorites; Inzaghi, Kaka, and Shevchenko solidified their place on top of the table. This was Kaka’s debut goal for Milan. 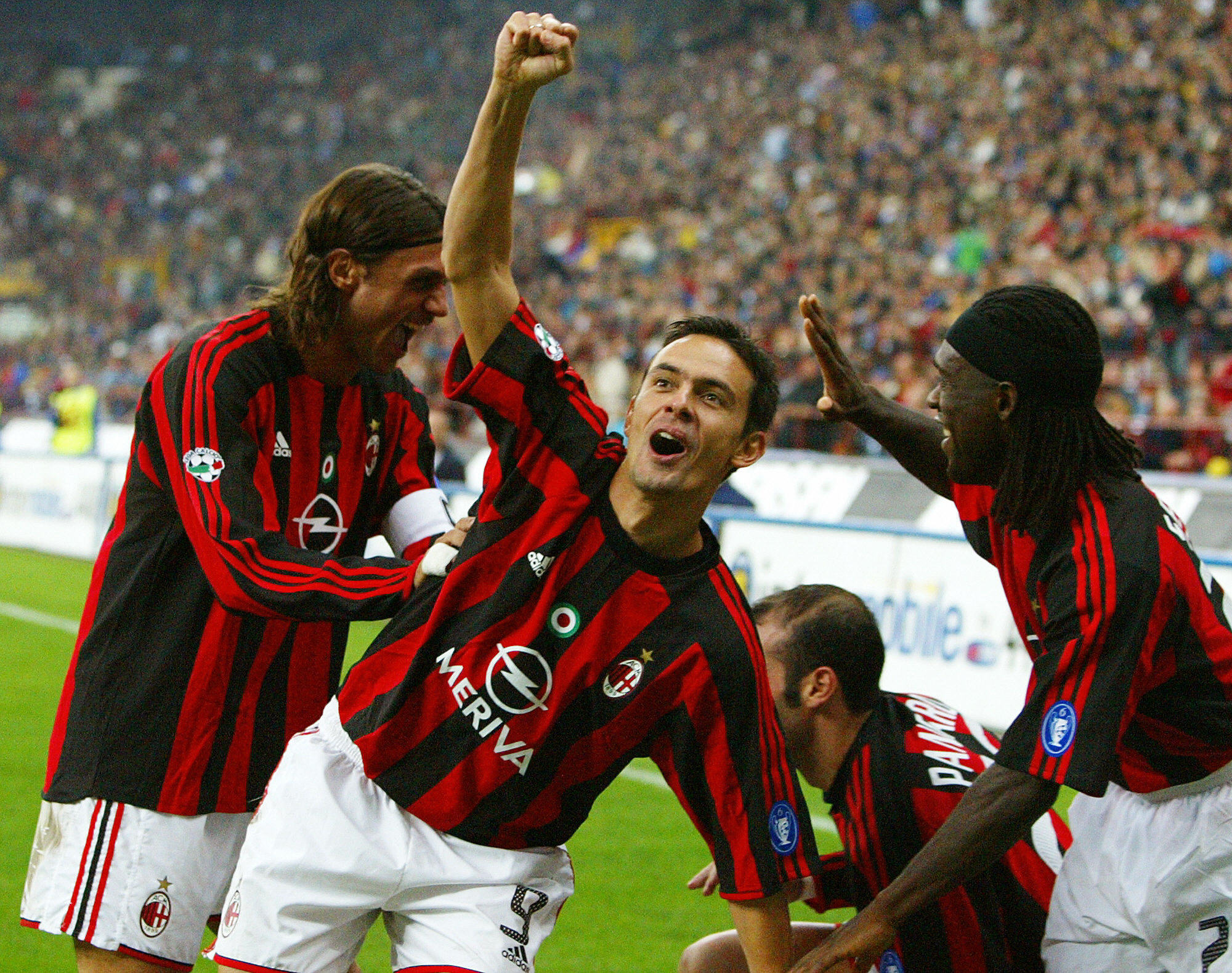 For the next match we have to travel back in time, but this isn’t the farthest back we will travel on the list. This was to determine the winner of the Coppa Italia. The formatting was unique as it was comprised of four groups of four totaling sixteen teams.

The winner of each group then played in a “finals group” round robin with the team collecting the most points declared the winner with no true final match taking place.

In this match up, AC Milan were victorious 4-2 which directly lead to the team securing the Coppa Italia as well.

Another 4-2 win for the red and black only this time you were probably alive to witness it. This time around the season was still young but that didn’t stop Contra from scoring one of the greatest Milan goals in derby history. To add to that were two goals from the derby’s top goal scorer, Andriy Shevchenko as well as a fourth from Pippo Inzaghi. Fun fact, all three goal scorers received yellow cards for taking their shirts off in celebration.

Still not the furthest back in time we will travel but definitely grab your grandpa to hear about this one. A man by the name of Jose Altafini put in four of the five goals on this day with Galli getting the remainder. Altafini, who finished the season with an outstanding 40 goals in all competitions, would complete his hat trick by the 40th minute. For good measure he added his fourth just after the half time whistle.

In Milan’s last season to be crowned champions, they recorded this triumph thanks to a brace from everyone’s favorite “what-if” player, Alexandre Pato, scoring his first in the first minute of the game. The third goal was then scored by everyone’s least favorite ex-Milan player, Antonio Cassano who scored a penalty in the final minute of the game.

ICARDI PALO, ICARDI PALO, ICARDI PALO! Easily the most memorable moment from our last victory in the derby but there were many other high points in this match up. Alex opened the match up with a power header, then came in infamous Icardi penalty that struck the post. This spurred the momentum in Milan’s favor and was followed up with a classic Bacca strike then a two tap Niang goal.

We wont get much further back in the history books than this, after all, Milan was only a club for twelve years at this point (Inter only three). Not much is recorded from this game besides the score line. All we know for sure is Milan showed Italy who were the kings of the derby this night.

The number three spot goes to a two legged affair as this was the Champions League Quarter-Final. The first game finished 2-0 and the second leg ended 3-0. This was also the game with the infamous flare on the pitch picture. So while technically not enough to make it alone, this was deserving of the spot as this was a year Milan reached the UCL Final (we wont be talking about that though). 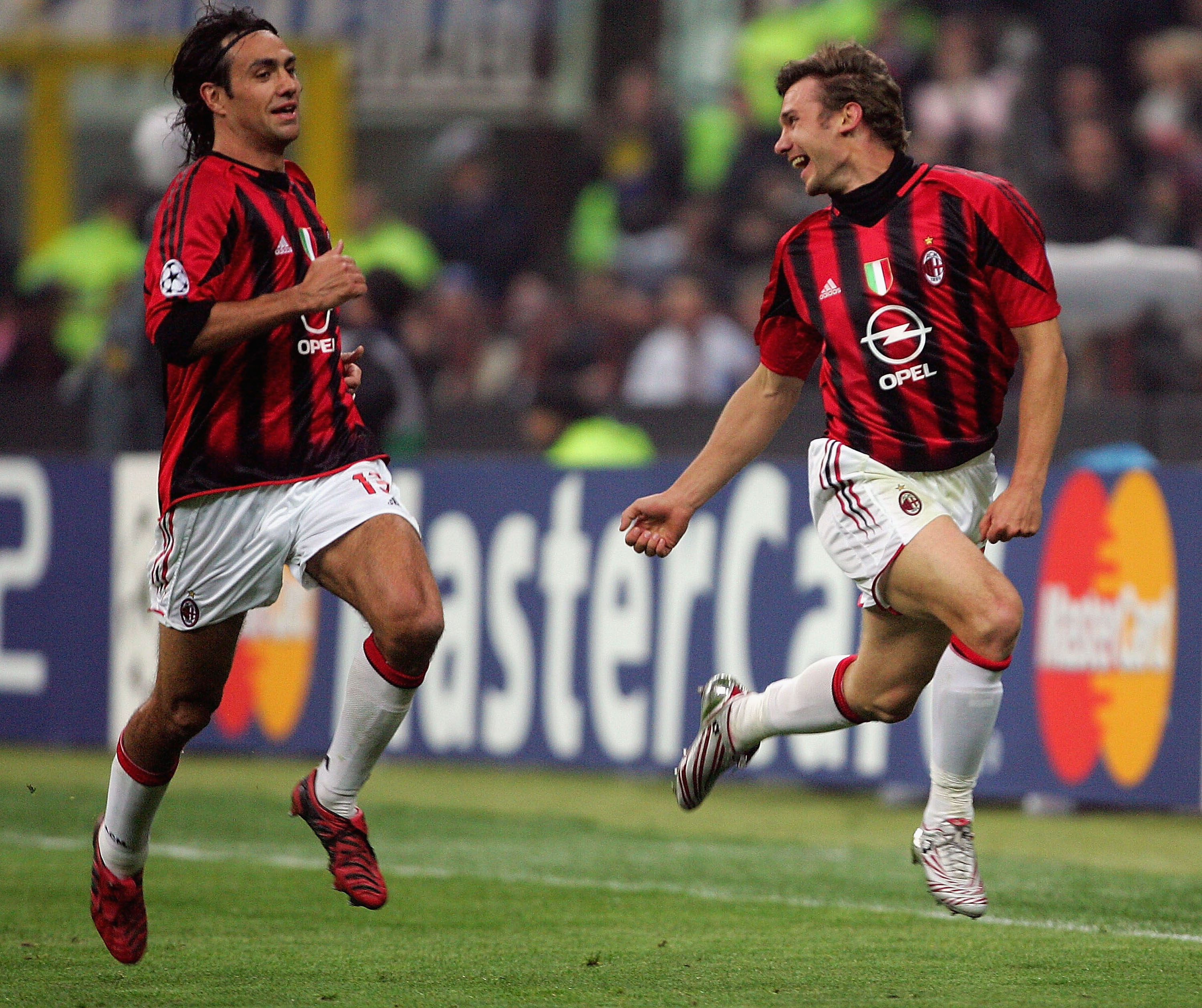 A true five-nill victory to make up for the double legged game occupying third place. Well sort of. This was also two legs as it was the quarter final for the Coppa Italia, however this score line was from one game alone.

In one of the worst season for Milan of the last decade; this win was the only high point of the season. With just over 36,000 in attendance it was apparent that this season was one to forget.

The biggest Milan win in Derby History. Six goals for the good guys and zero for Inter. One of the most iconic pictures of derby history is that of the score board. With a brace from both Shevchenko and Comandini, and complimentary goals from Giunti and Serginho. 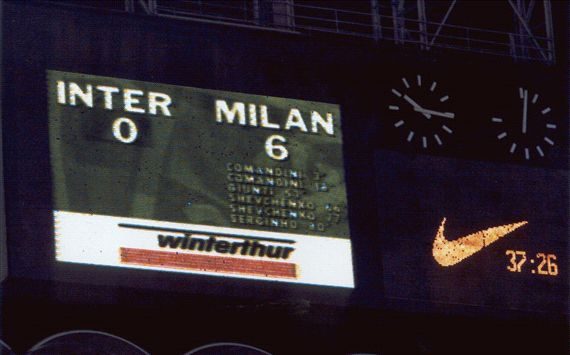 Milan have cemented themselves among the world’s best in club football and with the club expected to be sold just a day prior to the next derby; expect following iterations of this magical game to have even more impressive scorelines.

For more Top Ten lists celebrating the derby check out this article by Alex Viola.