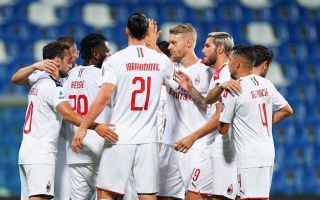 Over the last few years, the AC Milan management has made significant transfer decisions in order to restore the club’s reputation.

While some of these transfers failed miserably, others ended up being successful and effective in helping the team reach the performance levels that they enjoy at the moment. Here, we are going to look at the five players who have repaid the investment that the club made for their purchase.

The sums shown are based on the valuations found on Transfermarkt.com and do not reflect any possible future transfer sums paid for such players.

Ismaël Bennacer joined the Milan before the start of the 2019-20 season for the sum of €16million and arrived to re-enforce the midfield that was left struggling following inconsistent performances from Lucas Biglia and the void left by Tiémoué Bakayoko.

Bennacer had a rather shaky start to his Milan career and received 7 yellow cards in his first 10 league appearances and giving up two crucial penalties at home against Fiorentina in September of 2019 that finished 3-1 for the away team.

His performances improved significantly under the management of Stefano Pioli where he was allowed more consistent playing time and as a result developed a strong partnership with Franck Kessié.

During the early part of this season Bennacer continued on his positive performances despite the pressure of having Sandro Tonali on the bench.

Bennacer’s current midfield partner Kessié joined Milan during the radical summer transfer window of 2017 when Marco Fassone and Massimiliano Mirabelli were at the helm.

Following his superb 2016-17 campaign with Atalanta, Milan signed the Ivorian international for the total sum of €32m which factors in the fact he arrived on a two-year loan with obligation to buy.

His first two years at the club seemed to be rather inconsistent with the Milan fans only seeing a glimpse of the midfielder’s true ability. In his third year under the coaching leadership of Marco Giampaolo his performances went from bad to worse which can also be attributed to the to the tactical mishaps of the Milan coach.

By March 2020, his market valuation had dropped to approximately €20m and there were several rumours that Inter were interested in signing him in exchange for Roberto Gagliardini or Matias Vecino.

Kessié’s performances in the ‘post-lockdown’ period improved significantly as he played a crucial role in the midfield allowing the team to go unbeaten during this period. His start to the 2020-21 season reaffirmed Milan’s decision to keep him in the starting lineup as the 23-year old put in several key performances, especially against Inter where he was significant in limiting the threat posed by Romelu Lukaku.

The Milan captain and centre-back comes in at a modest third place. He joined the club from AS Roma in August 2015 for the sum of €25m following the insistence of Siniša Mihajlović who had managed the player during his time at Sampdoria.

While his transfer value was a talking point at the time of signing, Romagnoli instantly justified the price in his early performances for the club providing a level of stability and maturity in defense which had lacked in the previous years.

In 2019 Alessio Romagnoli reached a market value of €50m but this value dipped in 2020 following injuries and several inconsistent performances which were unusual for the 25-year old who was previously a certainty at the back.

The speedy left-back comes in second place following his rapid evolution in the Milan shirt. The 23-year old joined the club in July of 2019 from Spanish giants Real Madrid for the modest sum of €20m.

Despite a positive experience on loan at Real Sociedad, Theo Hernández was still more known as the younger brother of Lucas Hernández rather than for his own abilities and definitely needed to prove himself when he arrived.

An ankle injury at the start of the season did not hinder his development and soon after his return he was able to take the starting left-back spot from Ricardo Rodríguez, who had struggled significantly in his first two seasons at the club and was subsequently loaned out when it was clear that he would not be able to compete with Hernández for the starting line-up.

Hernández finished his first season with six goals in 36 games which was one of the most prolific first seasons from a defender in the history of the club. The Frenchman also developed more defensively after the arrival of Stefano Pioli to cement his breakout season, and all that remains is a national team call-up.

Donnarumma joined the Rossoneri’s youth academy in 2013 from his hometown club in Castellammare di Stabia. In a short number of years the goalkeeper was able to make his way into the senior squad and was given his debut by Siniša Mihajlović on 25 October 2015.

On that day ‘Gigio’ secured his place as the starting goalkeeper for the next five years as well as one of the most promising players in all of football. In terms of market value, Donnarumma is also the most valuable Italian football player, the fifth most valuable goalkeeper and the fourth most valuable player born in 1999.

The Diavolo will most definitely hope to sort out the contract issues of the Italian goalkeeper to ensure that they do not miss out on his significant market value.

The age of the 39-year old Swedish striker clearly has an impact on his valuation which stands at a measly €3.5m. Ironically – considering that Ibrahimovic’s reported wage stands at more than €7m per year – Milan are therefore paying the striker double his market value for his services this season, not that anyone is complaining.