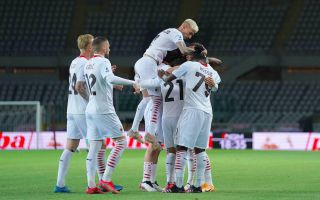 AC Milan recorded yet another statement win in Turin as they put seven goals past a hapless Torino side to record a huge 7-0 victory.

In truth it seemed as though the Rossoneri were heading towards a controlling and commanding but respectable victory at the interval as a thunderstrike from Theo Hernandez and a penalty from Samu Castillejo gave Milan a 2-0 lead at the break.

However, the away side were absolutely ruthless in the next 45 minutes, scoring five more times to really inflict pain on the Granata. Brahim Diaz netted to make it 3-0 and Theo scored again to add a fourth and really put the game beyond doubt.

Ante Rebic might have been late to the party but his contribution was simply outstanding; the Croatian scoring three times in 12 minutes to extend Milan’s lead to 7-0 and ensure that Champions League qualification could be just one more win away.

Head coach Stefano Pioli made two forced changes to his starting line-up compared to the 3-0 win over Juventus on Sunday as the injured Zlatan Ibrahimovic and suspended Alexis Saelemaekers were replaced by Ante Rebic and Samu Castillejo respectively.

There was almost a freak opening to the scoring after a cagey opening six minutes as Hakan Calhanoglu attempted to barrel his way through on goal after a ricochet inside the area was not cleared. The Turkey international was bumped over and the attempted clearance thumped against him while on the ground, and it only just spun wide of the far post after being unintentionally directed back towards the Torino goal.

The first chance for the home side came a few minutes later as Torino managed to find some space down the left side with Kjaer down, though Zaza’s first time shot following a feed from Mandragora was over the bar.

In the 19th minute, it was the Rossoneri who took the lead after a period of sustained pressure inside Torino’s defensive third. Some smart play from Brahim Diaz saw the Spaniard lay the ball into the path of the onrushing Theo Hernandez and the full-back hit the sweetest of shots that whistled past Sirigu inside the far post.

There was a huge chance for Milan to almost instantly double their lead as a perfect cross was stood up from the byline by Rebic onto the head of Kessie, who saw his glancing effort saved wonderfully by Sirigu, and Castillejo somehow hit the post on the rebound with the goal gaping.

However, in the 26th minute Milan did double their lead and this time it came from the penalty spot after Castillejo was mowed down by a reckless challenge from Lyanco. Kessie saw his penalty against Juve saved, but on this occasion he sent Sirigu the wrong way to double the advantage.

Milan though that they had made it 3-0 momentarily just after the half-hour mark when Rebic waited and played a perfect through ball the Calabria who lifted the ball over Sirigu and into the back of the net, but the offside flag was raised for a decision that was marginal but correct.

Torino had a huge opportunity to halve the deficit not long after as Calhanoglu gave the ball away in a disastrous position leaving Zaza in acres of space inside the box with most of the goal to aim at, yet Donnarumma somehow scrambled back to save Bremer’s shot after the Brazilian defender was rolled the ball.

A change arrived at the break as Bennacer – who was booked just before the break for an over-zealous challenge – made way for Soualiho Meite.

Milan made it 3-0 within five minutes of the restart as Brahim Diaz got his name on the scoresheet for the second game in a row. Kessie pressed high to capitalise on a poor pass from Bremer and the Ivorian squared to Brahim, who sat Sirigu down with an excellent finish.

Milan went on the prowl for a fourth goal and twice they almost had one before the hour mark. The first opportunity saw Kessie squander a perfect cut-back from Kessie on the edge of the six-yard box when it seems harder to miss, and the second saw a free-kick deflect onto an unsuspecting Brahim Diaz and hit the crossbar.

Calhanoglu became the latest to try his luck from distance in the 59th minute, sending his sweeping first time shot just wide of the far post.

Just minutes later, Milan did get the fourth goal that their dominance fully deserved. Again it was a devastating counter-attack that carved the home side wide open, with Rebic finding Theo Hernandez’s run in behind perfectly and the Frenchman netting his second of the night with a deft dink over Sirigu.

Torino barely had any time to settle themselves before the scoreline read 5-0. Substitute Rade Krunic – who had just come on for Brahim Diaz – waited just the right amount of time to slide Rebic through on goal and the Croatian finished expertly into the top corner at the near post.

Two more changes followed that goal as Diogo Dalot and Rafael Leao came on for Theo and Calhanoglu respectively.

Things got even worse for the Granata with just under 20 minutes remaining as it became 6-0. A fantastic through ball from Soualiho Meite found Rafael Leao in behind and created a two-on-one, with the Portuguese forward unselfishly squaring to Rebic for an easy tap-in and a quickfire brace.

The seventh goal arrived with 11 minutes left on the clock as a beautiful cross whipped over from Diogo Dalot was headed back into a dangerous area by Rade Krunic, and Rebic was on hand to finish with his knee and complete a 12-minute hat-trick to make it 7-0.

The final change came after the final goal with Rebic coming off for his compatriot Mario Mandzukic, and the last 10 minutes were seen out with absolute ease as Milan recorded yet another famous win.