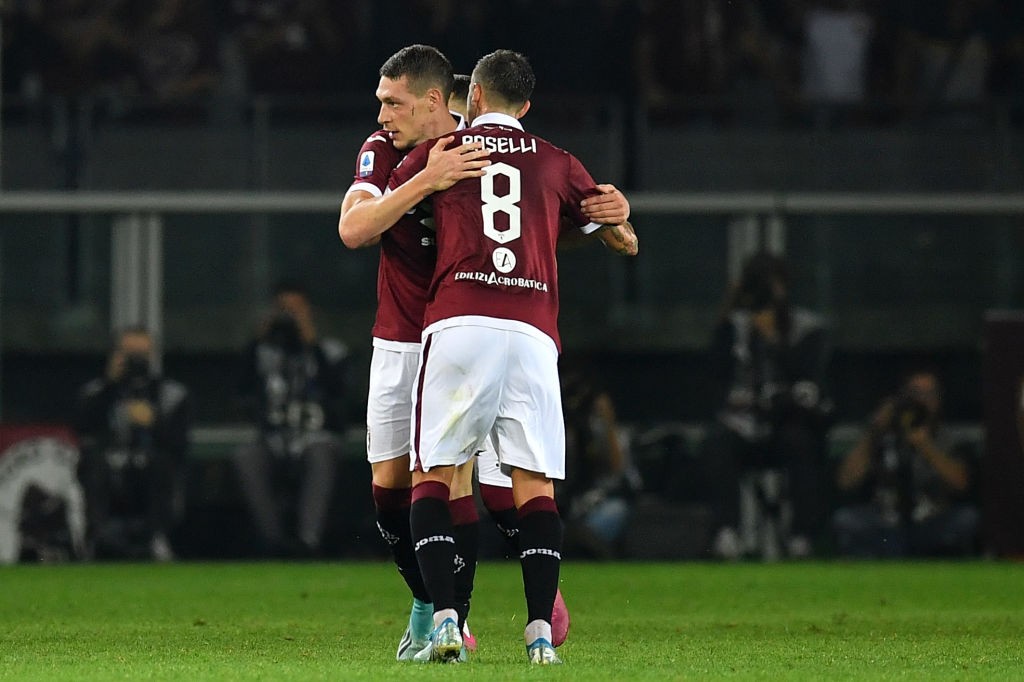 AC Milan slipped to their third defeat in five games as they threw away a lead against Torino to lose 2-1 on Thursday night.

Krzysztof Piatek’s first-half penalty had given Milan an advantage heading into the break, but things fell apart in the final 25 minutes.

Andrea Belotti equalised for the Granata with a deflected shot, but there was controversy surrounding the goal with appeals for a foul in the build-up and a red card shown to Pepe Reina for good measure.

Belotti then scored a second not long after with an acrobatic effort which would be enough to completely knock the stuffing out of Marco Giampaolo’s side and condemn them to another defeat.

The Rossoneri started the game brightly at the Sadio Olympic Gande Torino, and Theo Hernandez was given rough welcome on his return to action when he was clattered by Lorenzo De Silvestri inside eight minutes.

Moments later, a foul by Lyanco on Piatek 20 yards out saw him become the first player to enter the book, and Hakan Calhanoglu whistled the resulting free-kick narrowly wide of the near right post.

There was a moment of controversy just 17 minutes in when a cross from the right side saw Rafael Leao collapse between two bodies inside the area. Referee Marco Guida pointed to the spot and after consultation with VAR, the spot kick was confirmed.

Piatek – who of course netted the decisive penalty against Hellas Verona – took the responsibility again and went the same way, beating Salvatore Sirigu with a fantastic strike.

It was inches away from being a two-goal advantage for Giampaolo’s side in the 22nd minute when a Suso cross was flicked up by an outstretched leg onto the head of Leao; but Sirigu was equal to it with a miraculous one-handed save.

The Rossoneri – playing in a strange white shirt and black shorts combination reminiscent of ‘that night’ at Old Trafford – continued to apply pressure, and Calhanoglu forced another save from Sirigu with his effort from outside the box.

The game certainly had no shortage of intensity or late tackles, and Andrea Belotti became the second player to enter the book for his clattering challenge on Mateo Musacchio 12 minutes from the break.

Not long after Franck Kessie found space on the right byline to fire in a low cross and only a last-ditch header prevented Piatek having an easy tap-in to double the advantage.

Piatek had an opportunity to double his tally for the night not long before half-time when he was met by a corner from the right, but he couldn’t direct his header on goal from around 12 yards.

There was a scary moment just seconds before the half time whistle when Donnarumma came flying out of his goal for a ball over the top and missed it, though Belotti couldn’t keep his effort down with seemingly a gaping goal to aim at.

Torino started the second half on the front foot as Ola Aina – playing left-back instead of Diego Laxalt – fired through a crowd and forced Donnarumma into an easy but reactionary save.

Milan then had a golden chance to double their lead minutes later as Calhanoglu led a counter-attack and found Piatek, yet he somehow sidefooted his effort effort inches wide.

Musacchio looked troubled all evening, but made an incredible last-ditch clearance to deny what would have been an easy tap-in.

There was a scare for Hernandez when he went down under Armando Izzo after having his shirt pulled by Daniele Baselli. He was eventually ok after holding his ankle for some time, and somehow received a booking in the process.

The Frenchman was then involved going forward moments later and shot directly into the side netting from inside the area with Piatek screaming for the pull-back.

On the 65-minute mark there was a great moment as Giacomo Bonaventura made his return to Serie A action for the first time in 11 months, with Leao making way.

Torino drew themselves level with less than 20 minutes remaining as Belotti’s deflected shot was parried into the net by Donnarumma, but the drama was not done there.

Milan players surrounded referee Guida and appealed for a foul in the build up, and Pepe Reina was sent off for arguing from the bench. After a lengthy consultation with VAR chief Daniele Orsato, he was happy to let the goal stand.

Minutes later it was 2-1 and Belotti was once again on the scoresheet. His strike partner Simone Zaza saw a shot parried into the path of Torino’s No.9 and he finished at the second attempt with an overhead kick.

The home side managed to put the brakes on the game and restrict Milan to half chance, but Franck Kessie should have levelled the game in added time when he was found in acres of space inside the area, lashing his effort over the bar from about five yards.

Zaza should have sealed all three points when he slipped through on goal, but Sirigu was the hero for il Toro as he saved a Piatek header from close range in the dying moments to preserve the win.

As a result, Milan sit tenth in Serie A after five games played and just one point off Sunday’s opponents Fiorentina, who sit in 17th.