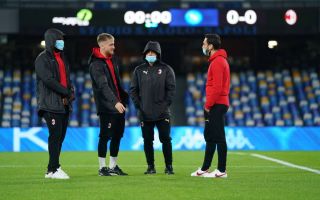 There are five AC Milan players who have seen their market valuation drastically increase in the 2020-21 season, according to a report.

As Transfermarkt reports (via MilanNews), among the players who have increased their value since July 2020 there are five Rossoneri players, after a season in which the team secured a second-placed finish and a return to the Champions League.

We start with Davide Calabria, whose value has seen an increase of €15m after a bounce-back campaign in which he made the right-back spot his own. His full-back partner Theo Hernandez has also become more valuable, as another superb season has seen him go up by €18m.

Playmaker Hakan Calhanoglu has seen his value increase by €20.5m, while midfielder Ismael Bennacer’s worth has gone up by the same amount as his Turkish team-mate. Finally, and perhaps as is to be expected, Franck Kessié’s value has increased the most having climbed €35m.