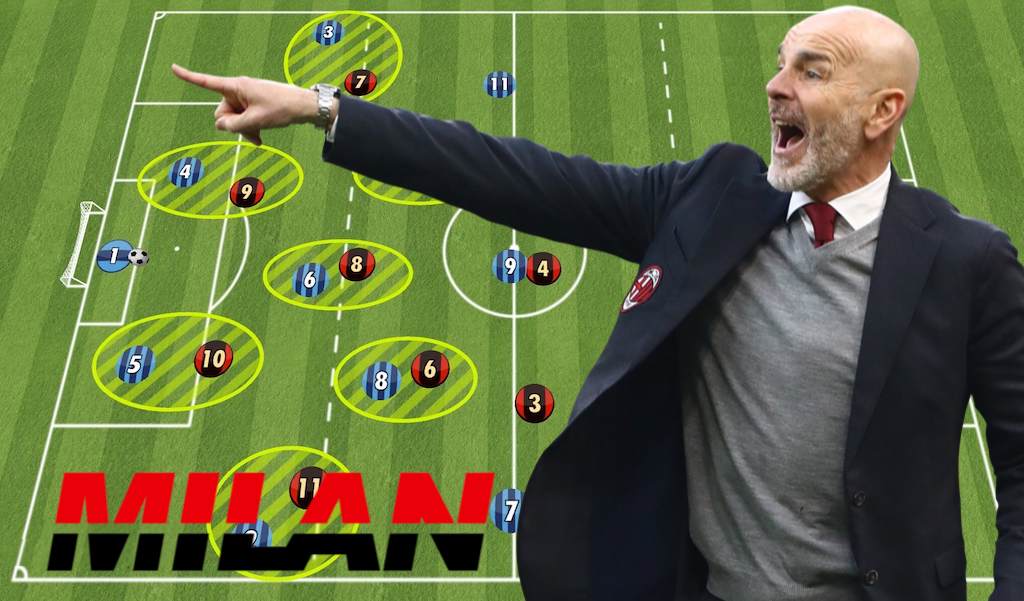 Transitions, combinations and an intelligent press: A detailed tactical analysis of Milan under Pioli

After seven rounds of Serie A action and three rounds of the Europa League group stages, Milan head into the international break atop both tables.

Milan have somewhat amazed fans and pundits alike so far as they went 24 undefeated playing an expansive style of footballm and while the unbeaten record is still intact in Serie A – having won five and drawn two – the run came to a halt at the hands of Lille in Europa League.

Stefano Pioli was not the first choice coach of many fans and his appointment was met with a lot of criticism aimed at the management. However, after conducting thorough research of Flick’s Bayern, Milan have successfully re-created that style with variations keeping the principles in mind.

Here, we review the season so far attempting to understanding principles employed tactically while crunching the numbers too.

Milan have now scored in 27 consecutive games in Serie A, only matched back in 1949. This run is borne from a complete revolution in areas of attack under the stewardship of Pioli and Maldini.

The Rossoneri had only scored 16 goals in 18 games in the run up until and including the 0-0 draw with Sampdoria last season, which was Milan’s last goalless game in Serie A.

Milan signed iconic striker Zlatan Ibrahimovic on a free transfer, then sold Kryzsztof Piatek and Suso to Hertha Berlin and Sevilla respectively. With Rebic transformed and Samu Castillejo taking up the triumvirate behind Zlatan, Milan shifted to their 4-2-3-1 formation Pioli preferred.

With Rebic, Calhanoglu and Samu Castillejo in the trident, Milan had a dynamic forward line with pace which made sure that they had a certain unpredictability about them which was missing when the team became very dependent on Suso.

With Saelemaekers and Leao slowly eased into the side, the Diavolo further varied its attacking components with the former being the perfect system player for Milan. The summer arrivals of Brahim Diaz and Jens Petter Hauge it added a different paradigm to Milan’s already stacked attack.

Milan have various methods of building out from the back. The most direct and easiest approach is to have one of Donnarumma or the defenders lob the ball or kick it out towards Ibrahimovic, who uses his vastly superior physique and hold-up play to control the ball and give time for the midfielders and wide men to make runs into advanced areas.

If the opposition team like to sit deep and settle into a low block, then Milan have a more patient approach to their build-up play. Aided by one of the midfielders – Kessie or Bennacer – sitting back and forming a back 3, both the full-backs push up to act as passing options for the centre-backs, bringing out the ball from the back.

If the full-backs are being marked tightly, then they cut the ball back for the advanced centre-back to make a pass to either one of the wide attacking players occupying space.

Depending upon the space in between the lines, the wide attackers would take up positions to receive the ball from the middle third to allow the full-back’s to make a run. If the central defenders move inside, then it allows the full-backs to make an overlapping run.

If the attackers stayed wide or ventured wide, the full-backs make a run infield run (underlapping run) to make a cross into the box or shoot from outside the box. Now Milan do not have a pattern of build-up: they alternate between various areas and channels which makes them altogether unpredictable.

Rebic moves infield to allow Theo to overlap to cross for Saelemaekers to score.

An example of an underlapping run by Dalot.

Another tactic Milan use to catch opponents off guard is switching play. Milan suck their opponents into a narrow defensive wall and quickly switch play with a horizontal pass, or they use one of Kessie or Bennacer to switch the ball.

Hauge’s goal vs. Celtic is a clear example of how Milan suck opponents to one side and switch play.

Milan do this by having Ibrahimovic, Calhanoglu and one of the midfield pivot to pull players to one side of the field and then quickly change flanks and catch the opposition off guard.

A graphic representation of how players position themselves during a horizontal press.

A very distinguished and exceptional concept of Milan’s attacking phase are the various passing combination used.

Passing combinations are instruments used to inculcate the concept of speed and precision in a team’s attack. As the adage goes, the ball travels faster than the player. Hence quick combos can be used to pull defenders out of position and move the ball to create chances.

Milan’s players create triangles with their passing and take the opposition out of that particular sequence of play, ultimately creating goal-scoring chances.

This passing combo executed between Theo, Kessie, Krunic and Ibra results in a clear cut chance for Theo.

Whenever Milan advance into the middle third with the ball, the attackers move into position to form a passing triangle for one touch-passing, moving the ball and prizing open the defense.

Moving the ball quickly helps Milan to catch the opposition defence during a moment of disorganisation.

One of the main principles of the Gegenpress is to win the ball back and release it as soon as possible with quick vertical passes forward.

With Milan having removed Suso, Paqueta and Piatek and having added Leao, Saelemaekers, Diaz, Rebic and Ibrahimovic, the team now have players who can not only sprint but have excellent close control and good passing/crossing skills to prey upon the disorganisation in the opposition half.

In Hakan Calhanoglu, Milan have a player capable of operating in transitions and his role is built for teams playing on the counter. As somebody who stays away from the press, his quick release of the ball helps in vertical play and maintaining the urgency of the counter-attack.

Brahim’s goal against Celtic is a perfect example of offensive transition.

Modern football is all about space, specifically how we interpret the space and utilise it. With so many advancements in tactics and players’ individual abilities, spaces are closed down very easily.

Football has mechanisms for counting goals and assists that are scored or created every game, but a non-quantifiable part of the game is the intelligent movement of players that creates space to open up passing lanes or space to shoot, and Milan’s forwards are very co-ordinated in terms of creating space.

Ibrahimovic holds up the ball and Leao, with his movement, creates space for Kessie to shoot.

Another source of chances is the hold-up play and knock-down ability of Zlatan Ibrahimovic. At 195 centimetres tall, the Swede is a difficult customer for defenders to deal because of the sheer strength he brings.

With balls being played into Ibrahimovic, he can easily hold it up or knock it down into the path of an oncoming player (especially Calhanoglu) to shoot. It is a very quick and direct way of creating an opportunity.

A phase that underwent change under Pioli is the concept of defending. The Rossoneri transitions from a reactive method of defending into a pro-active form, and it has seen Milan give the opponents very less space to manoeuvre.

Pressing is described as closing down the opponent as soon as the team loses the ball by hounding the player in possession. The principle is that the opposition player will need a few seconds to bring the ball under control and think about his next move. The team that presses plans to catch out the disorganised player and retrieve the ball.

Notice how Milan press in this game against Roma.

Pioli’s Milan also presses their opponents albeit in a different way to the press used by Flick’s Bayern and Klopp’s Liverpool, for obvious reasons of difference in quality and physicality.

Milan choose to use the concept of shadow cover, which is cutting off passing lanes for the player in possession. With this in mind, the team have certain pressing traps where they genuinely leave open a passing lane for the player to pass towards and then they press him in numbers forcing him to play an inaccurate long ball or lose the ball or sometimes go back to the goalkeeper, if that option is available.

Milan employ horizontal pressing that means that they will block the centre with the midfield pivot and shadow covers and force teams wide.

Using the touchline as an extra man, Milan stay very narrow and restrict the team to the wide areas often forcing the team to either to switch with an inaccurate pass or force the ball into touch.

Milan as we know defend in a back four. If the opposition play past Milan’s press – as we have seen quite a few times this season – Pioli’s men re-shape themselves into a narrow four at the back and clutter the middle of the pitch not allowing teams to take shots. This is at the expense of teams going wide.

A major cog in this move is the double pivot who play very close to each other forming a narrow midfield block.

To summarise, while it might feel like Milan have simply stumbled upon a winning formula and have kept rolling it out game after game, the tactical evolution under Pioli is clear to see with the mechanisms on and off the ball being fine tuned week by week.

The truth is that Milan are still on a journey under Pioli – something he has admitted to multiple times – and to expect a perfect and fully polished product at this moment in time would be unreasonable.

However, the positive signs are there. The Rossoneri know what works to their strengths, they have improved copious amounts in both the attacking and defensive phases since the days of Giampaolo and even under Gattuso, and it is starting to bear fruit.

Whether Milan can stay at the top of the table remains to be seen, but they are not expected to either. One thing is for sure though, fans have a team they can be proud of and that are playing entertaining football, contributing to the overall impression that this is a project worth sticking to.