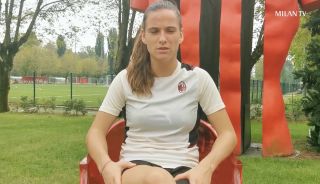 Laia Codina recently gave an interview to Milan TV, during which she spoke of Milan being a new team, how she’s faring in Italy, and how she looks up to Vero Boquete.

She even spoke a little Italian during the interview, which is a sign that she’s adapting well to life in Italy. Here’s a translation of her interview down below…

On Milan being a ‘new’ team: “We are a new team, so I think we need to work harder during every match, and during every training session, so that we can have a good season. We have to approach all of the games in the same manner because they are all important.

“We have seen that Serie A is very competitive and therefore, you need to train well all week to play a great game and to win it. We switched gears after the Champions League, but as I said before, the season is very long. We have to show that we are improving match after match and that this team is growing and has a future.”

On how she’s faring in Italy: “The people are very kind, and I settled in well rather quickly. I am trying to improve my Italian so that I can better integrate into the country, and I am very grateful for how I was welcomed by everyone.”

On Vero Boquete: “I am grateful to her [for her help] as she shows up on the pitch and I’m always looking for her. There is a lot of understanding with her and she gives me a peace of mind. She knows football very well and helps us [the team] both on and off the pitch.”

On the differences between Spanish and Italian football: “In Spanish football, there is a tendency to focus more on ball possession, whereas here in Italy, they attack the spaces when they’re given that chance and above all else, they quickly seek to attack the opponent’s goal.”

On Milan: “Milan are a historic club, and all those who love football appreciate Milan as a club and a team. I am very happy to be here.”

On the women’s team and their growth: “I think we (Milan) will grow a lot in every aspect. More importantly, there is still a lot of room for improvement. I also really like the presence of many new and international players on the team and you can see that there is a great ambition and desire to do some great things.”