Trying new solutions and an injection of quality: Tactical analysis of Milan’s win over Venezia

AC Milan were able to make it four wins from five to begin the Serie A season and move joint-top with rivals Inter at least for the time being with a 2-0 win over Venezia.

In truth it was far from a classic game or a vintage performance from the Rossoneri, but second half changes paid dividends for Stefano Pioli as substitute Theo Hernandez set up Brahim Diaz for the opener while another sub in Alexis Saelemaekers put Theo through to kill the game with a second.

All in all a vital three points were secured with some slight rotation too. Here’s a look at the key tactical points from the game…

It was as if Milan knew what was about to come and set about trying to combat it early to avoid another situation like the several times last season that they dropped points against lesser opposition at home through failure to break down the low block.

As seen below, a high press was deployed right from the start with six players pressuring the away side, including a vertical press from the double pivot and the front four pressuring the ball carrier while also covering passing lanes. 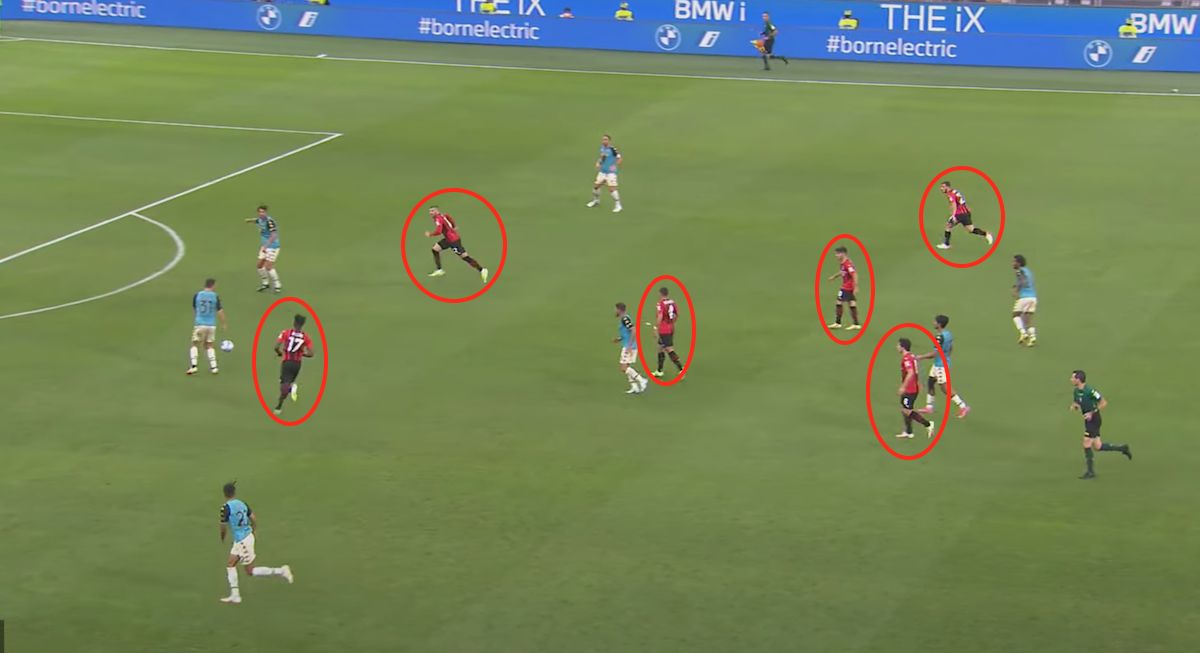 What this did do is make Venezia give the ball away cheaply on various occasions, and it is here that we see an interesting trait of Pierre Kalulu’s defensive game. He made the centre-back think the ball out to the winger was on, as he lofted it forward. 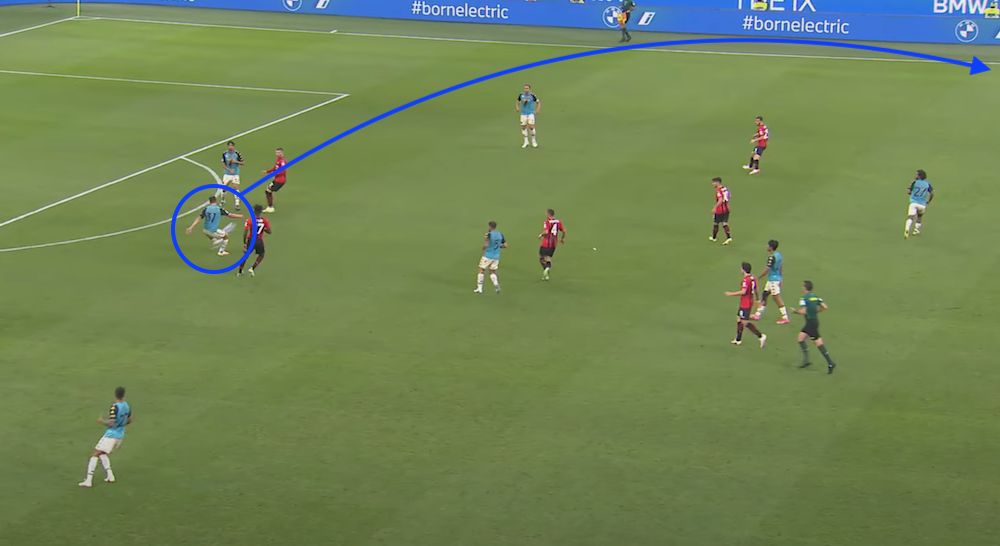 While the ball was in the air, Kalulu times his surge forward to perfection. Just as Johnsen thought he was about to take the ball down, the Frenchman stole in and took possession. 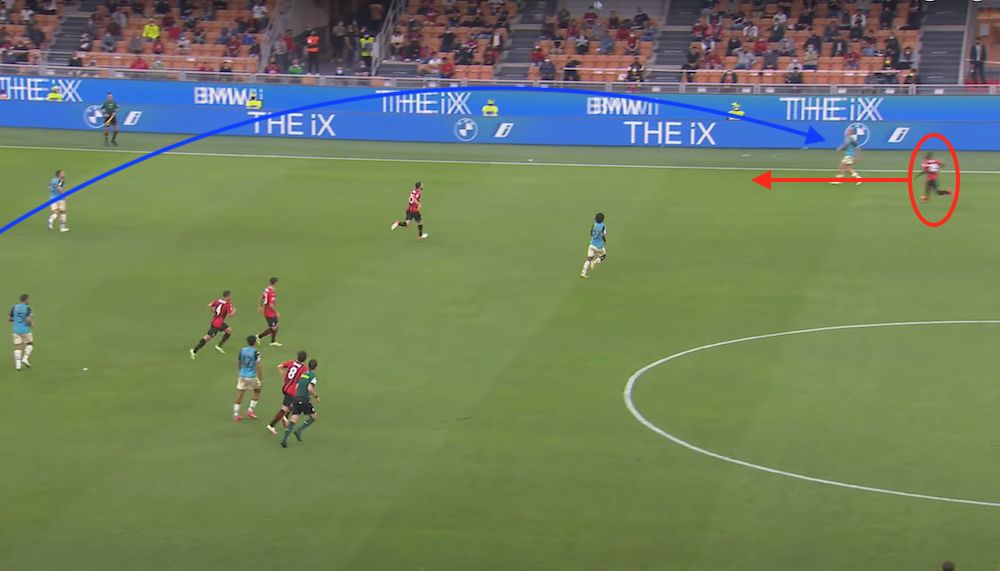 This was smart play as it resulted in a quick counter-attack, which concluded with Kalulu rolling a shot just wide of the far post after a neat one-two. Cutting the opponent open seconds after winning the ball back is a key principle for Pioli’s style. 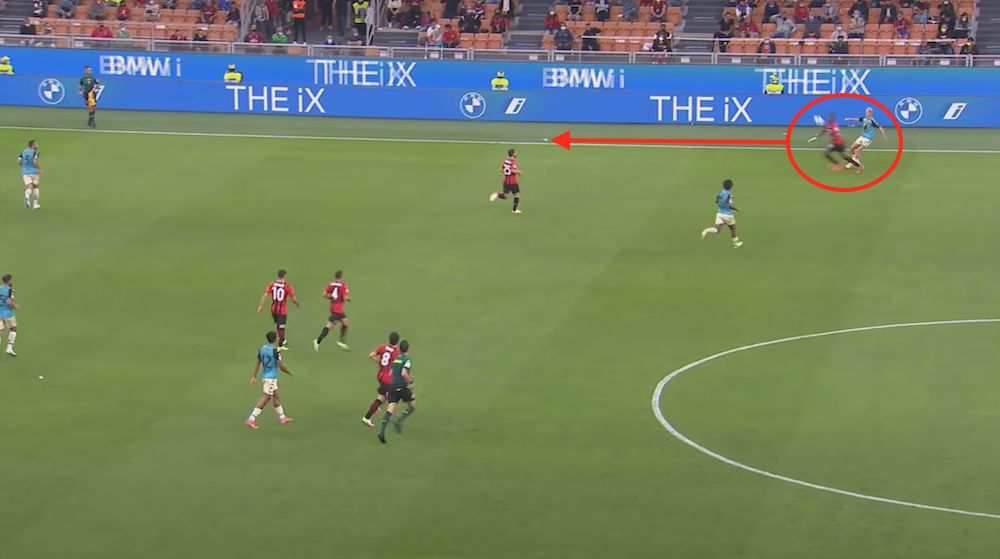 As seen below, Paolo Zanetti’s side actually did a good job of sorting themselves into two flat and very compact banks of four when defending. This allowed Milan to have a lot of the ball in their half, but without a centre-forward to command one or two centre-backs, the Venetians were finding it easy to clear. 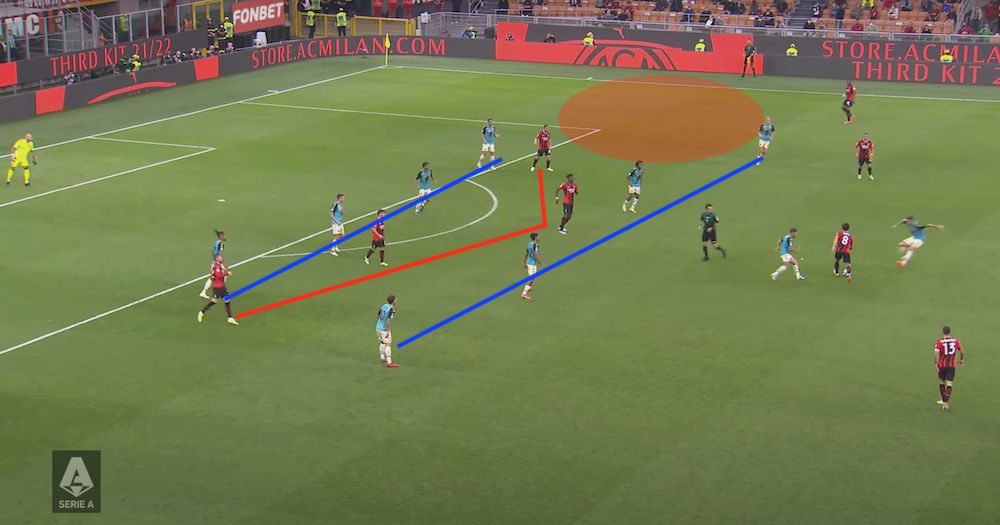 It was obvious some imagination and quick thinking was needed. The solution was to try and create moments of disorganisation by moving the ball with urgency into areas with less cover. A ball into Florenzi was diverted out wide into space, creating some panic for Venezia. 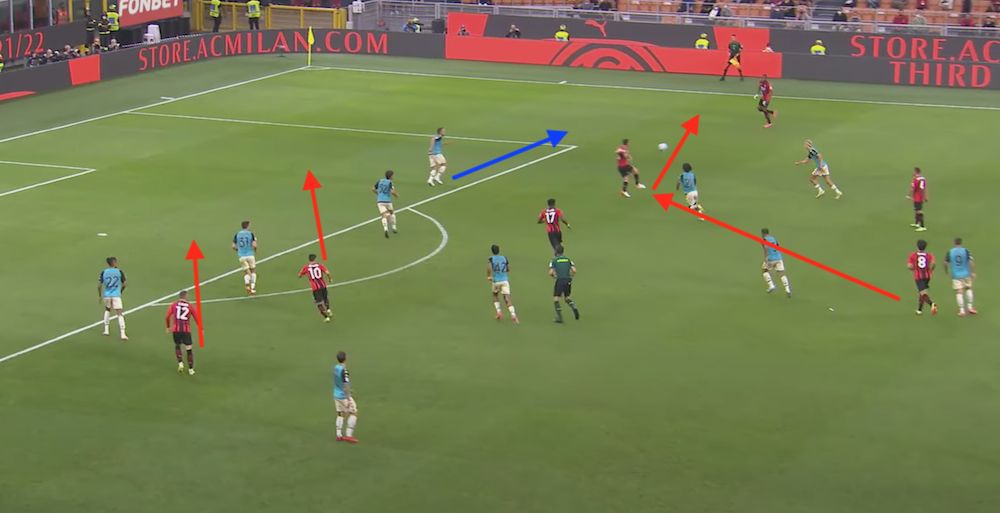 They reorganised well and dropped a bit deeper, backing themselves to not let any of Milan’s forwards – none of whom are natural strikers – hurt them from a wide delivery. However, Florenzi continued his run and got on the end of the cross, glancing just wide. Spontaneous and nearly very effective. 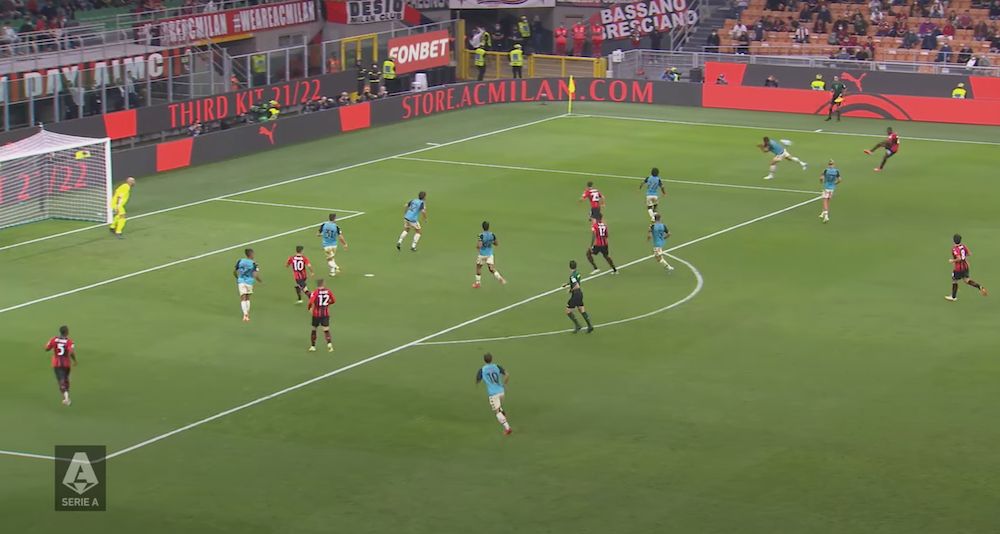 Venezia were impressive in their organisation for 68 minutes but offered very little threat from open play, such is the trade off for lesser side who come to try and defend the point they have in hand upon arriving.

However, set pieces can be a useful and hopeful weapon, with Milan nearly paying the price in the first half. A line of seven defenders are clearly marking zonally on the edge of the six-yard box, but nobody gets ballside of the two men at the near post.

Considering this is a corner routine Milan use quite often, it was disappointing to see the lack of reactivity to what was unfolding. The men who were previously quite well positioned to deal with a flick-on all of a sudden became flat-footed, and it really should have cost a goal. 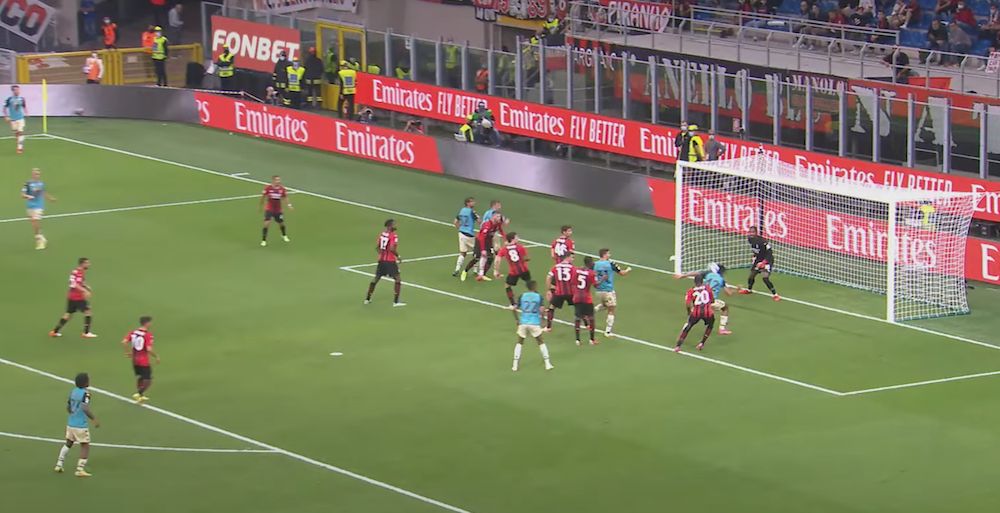 Venezia’s two banks of four occasionally switched to create more numbers on the edge of the box as Milan camped closer and closer to their area, as seen below by the sheer numbers in between the ball and the goal. 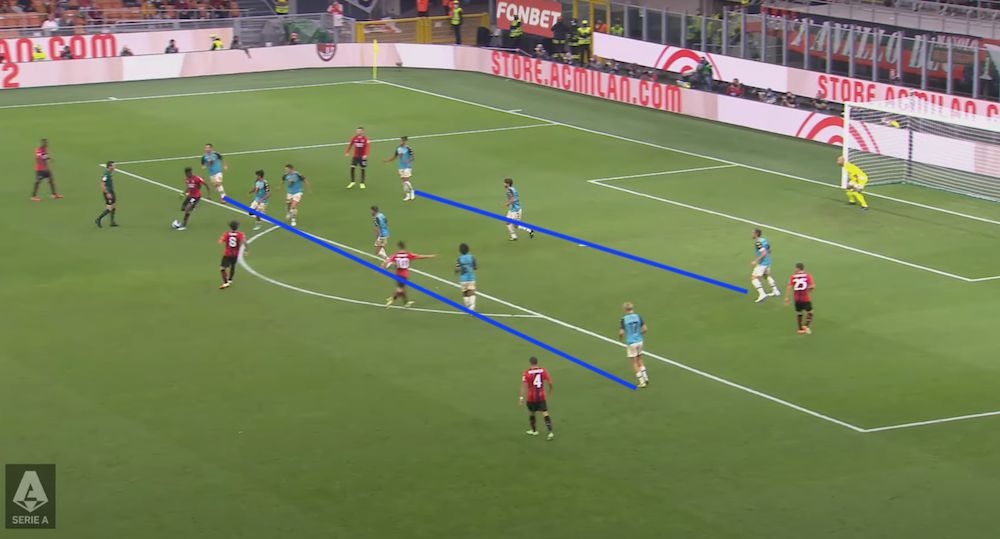 Milan knew they weren’t going to score through conventional crosses towards the penalty spot given the absence of Ibrahimovic or Giroud, so they sought to create an overload at the back post and capitalise on the disorganisation to score from the second ball. 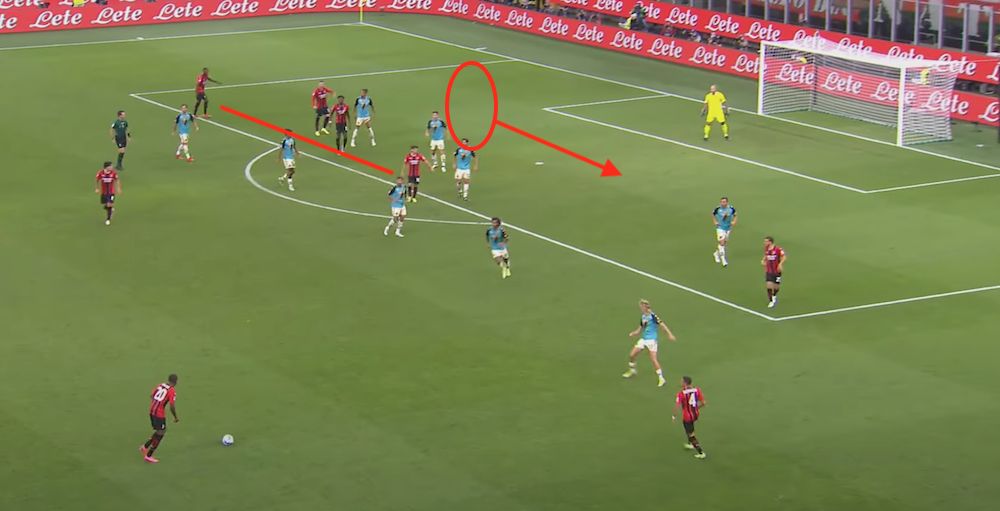 In this instance, the ball makes it to Rebic on the back corner of the six-yard box and the plan almost works to perfection, with Brahim Diaz lurking alone on the penalty spot. 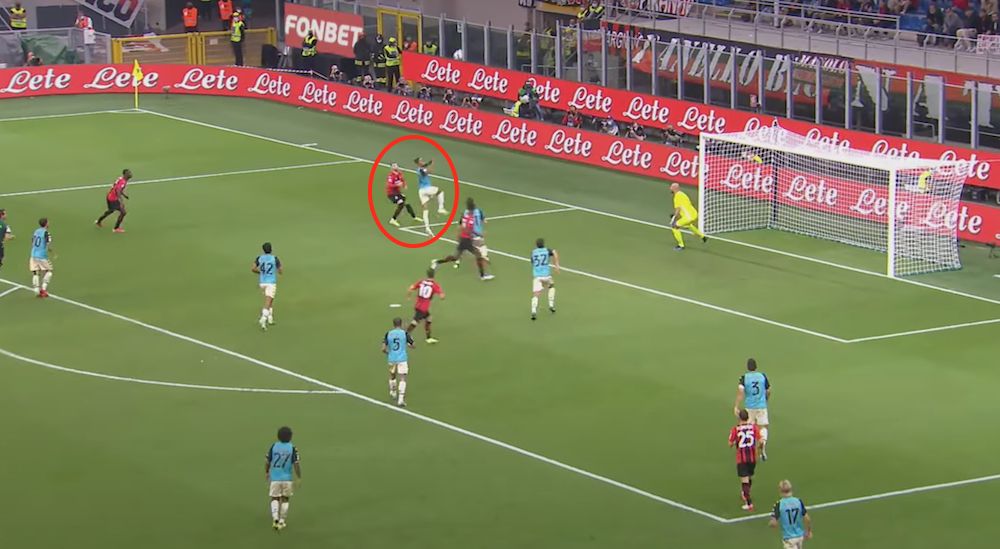 The Spaniard is found brilliantly by the nod back across goal but leans back when taking on the volley. He should have done better, but would make amends. 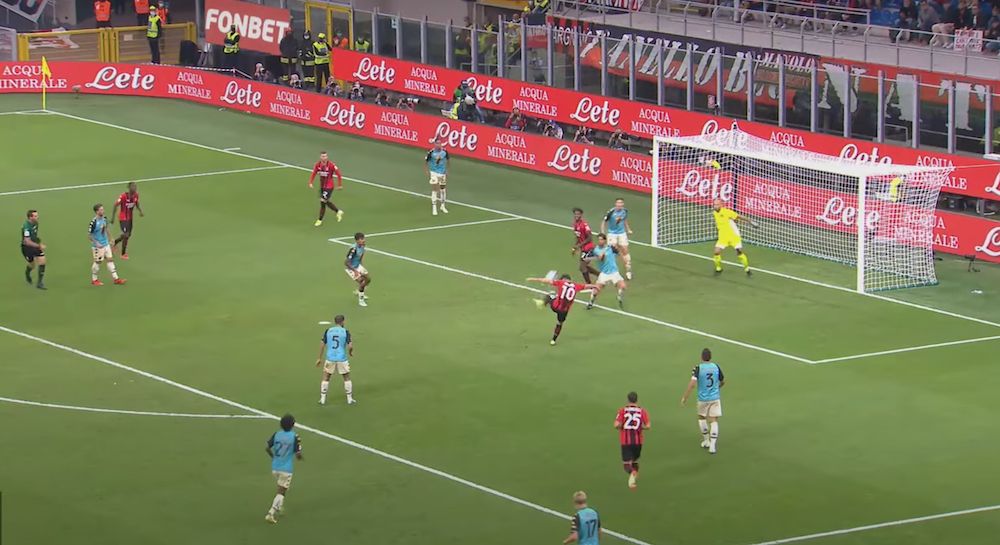 The substitutions brought an injection of life, and Theo Hernandez’s role upon his introduction was obvious. Milan knew they were having joy with the deep crosses, so Theo came on as a winger and Fikayo Tomori was also brought on to ensure that any gaping hole on the counter-attack from the full-back’s advanced position could be covered quickly. 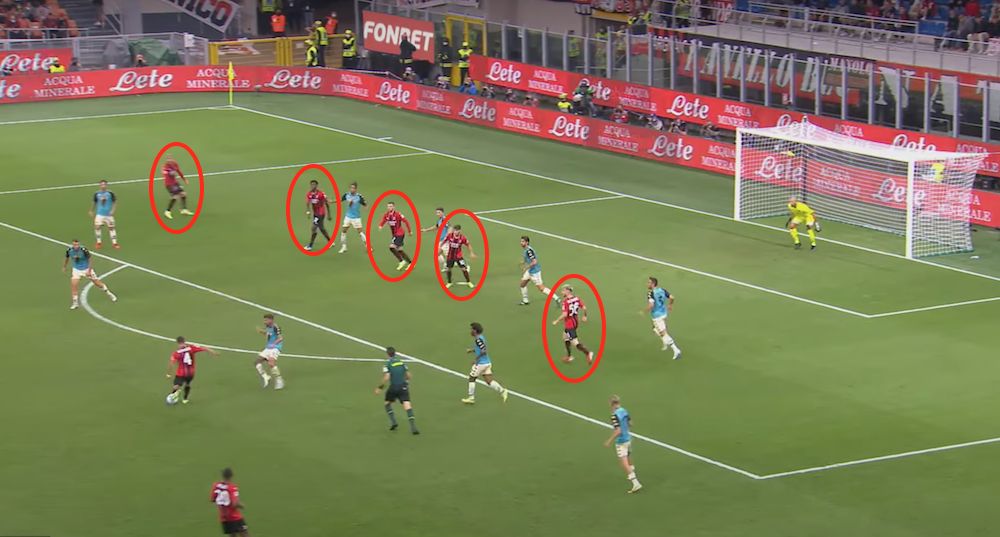 This decision is what led to the opening goal. It took perfect execution from Bennacer and Theo to create it, with a superb ball to the latter at the far post, and wonderful technique to then direct it over to Brahim who this time couldn’t miss. 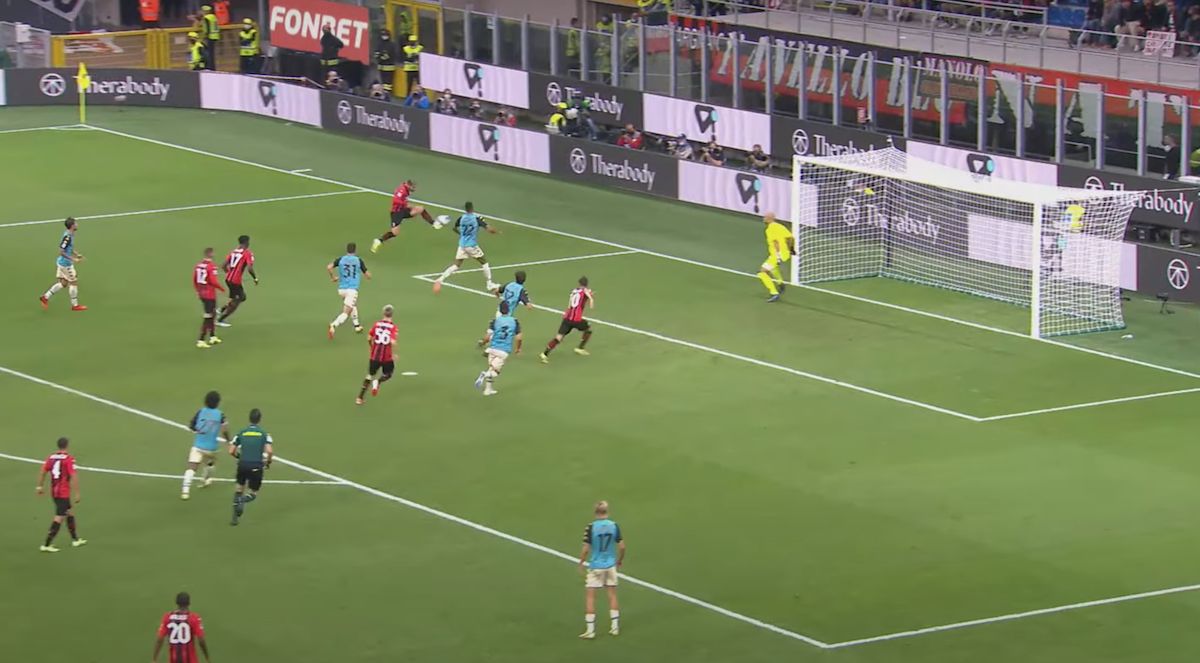 Killing it with style

Looking at the frame below, the most obvious solution for a winger receiving the ball with his team 1-0 up in a hard slog and just 12 minutes left is to pass the ball inside or back to his right-back. However, Saelemaekers shows his improved in-game acumen and his technique to spin his man. 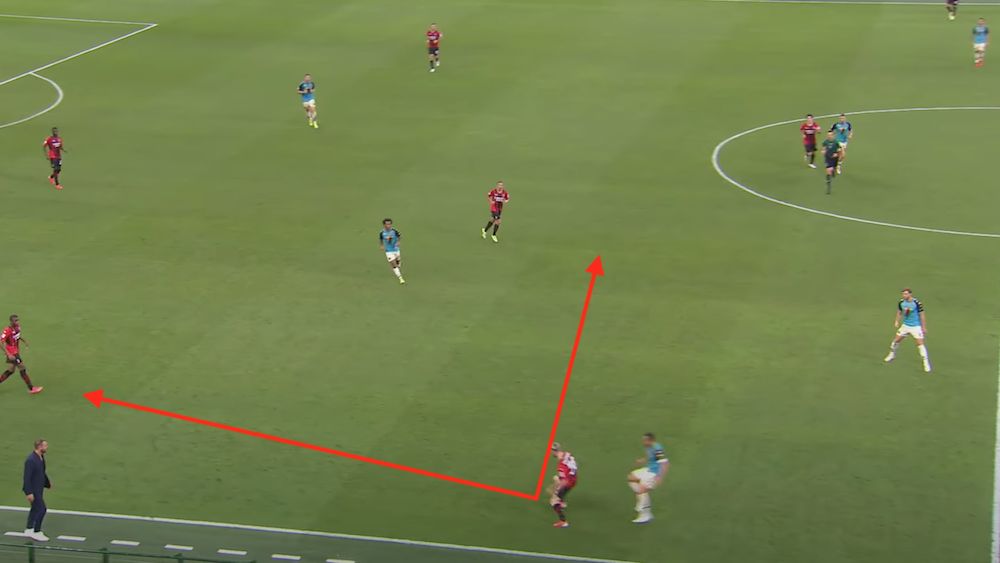 After offloading to Kessie, this is where the burst of intensity comes into play that fresh legs off the bench can bring. The Belgian is first to the pass from the Ivorian and powers forward with it, while the runs from Leao and Pellegri clear the way by dragging the centre-backs. In the meantime, Theo is almost not in the game. 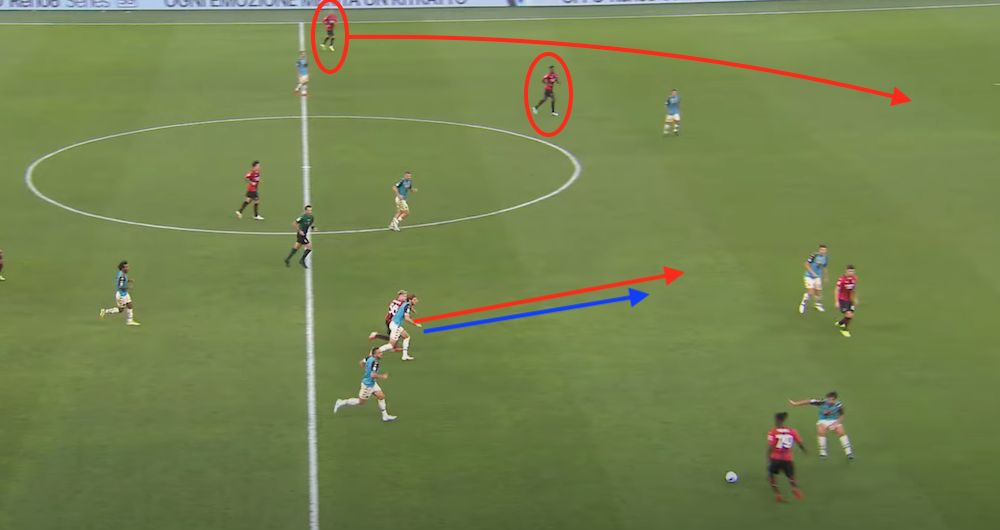 There must be some kind of telepathic understanding between Saelemaekers and Theo, because the latter isn’t even in the frame when Alexis chooses to ignore the runs of Leao and Pellegri, instead rolling the ball wide to the left. 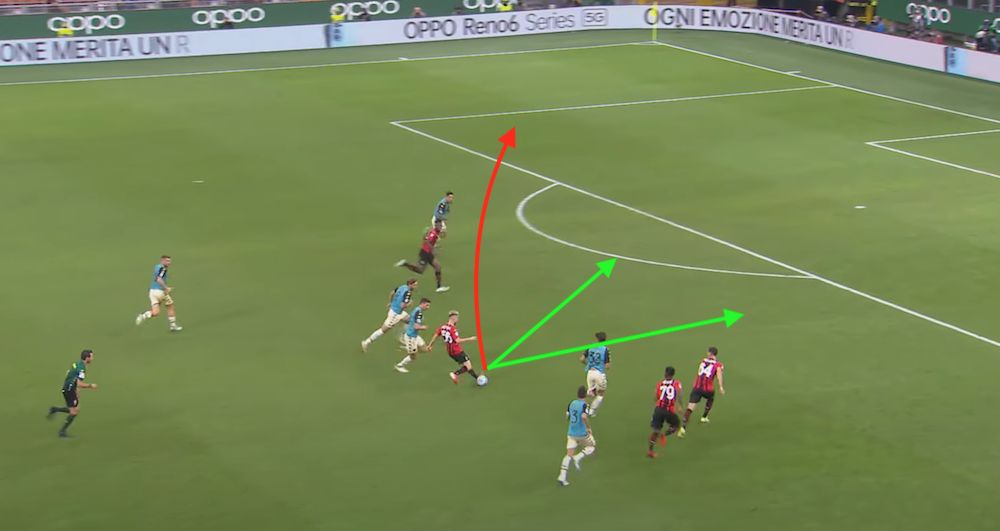 The end result is that Theo arrives – virtually in his own postal code – to thump home and win the game. 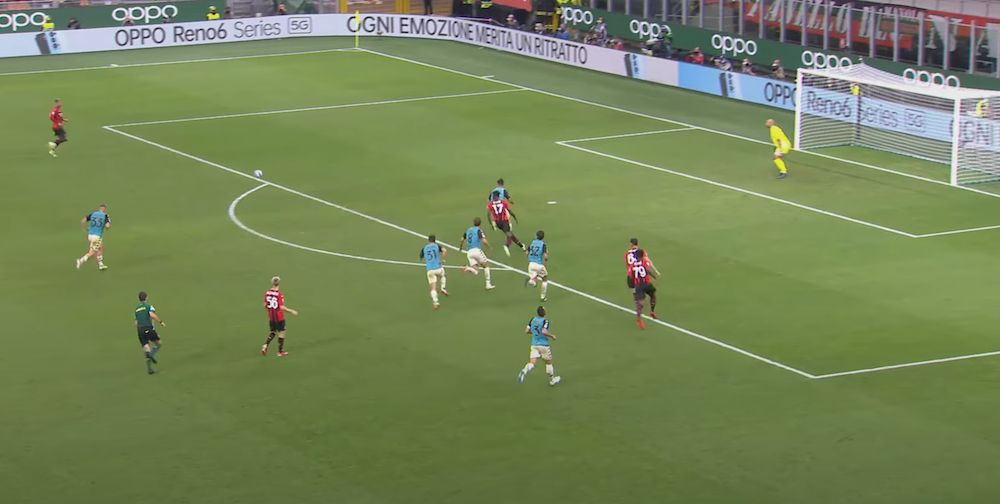 There is certainly some interesting data from the game. Starting with the heat map of both sides, it doesn’t tell us too much about attacking patterns, but certainly gives an education of high how up the pitch Milan were able to camp, in both halves being in possession mostly between the 18-yard box and the halfway line.

Venezia meanwhile were very deep, with a lot of touches on the edge of their own area, and virtually no presence at all in Milan’s half. 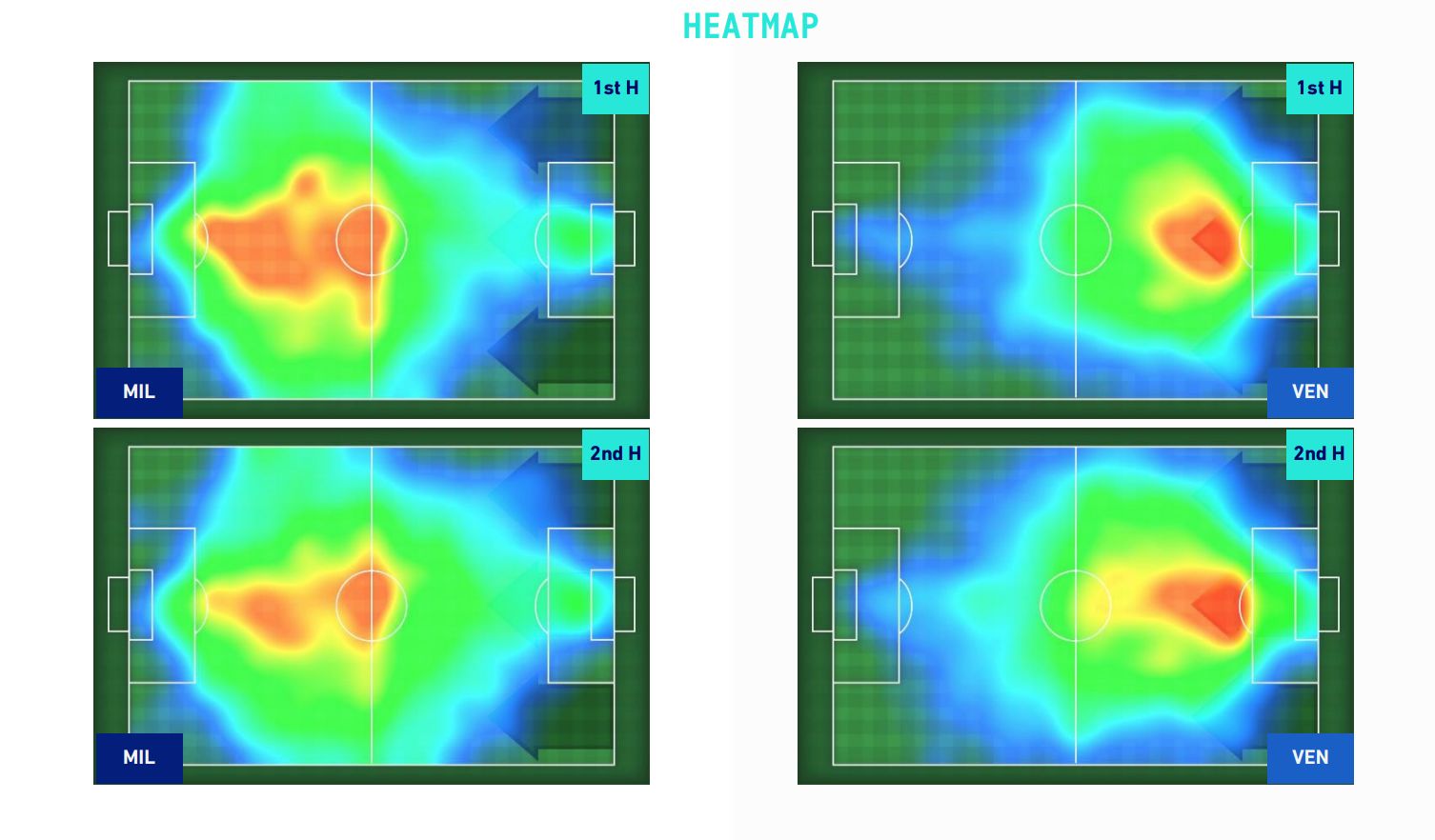 The average position map is where the trend becomes very obvious. In the first half, Milan pushed incredibly high up the pitch, essentially playing a 2-4-4 formation to try and pin their opponents deep.

Last season we criticised Milan time and time again for simply not coming up with any ideas to break down a low block in the absence of Ibrahimovic. This time Pioli decided his approach was to get more bodies forward, and it resulted in a more probing and dominant performance. After all, when the opponent offers nothing, how can they hurt you? 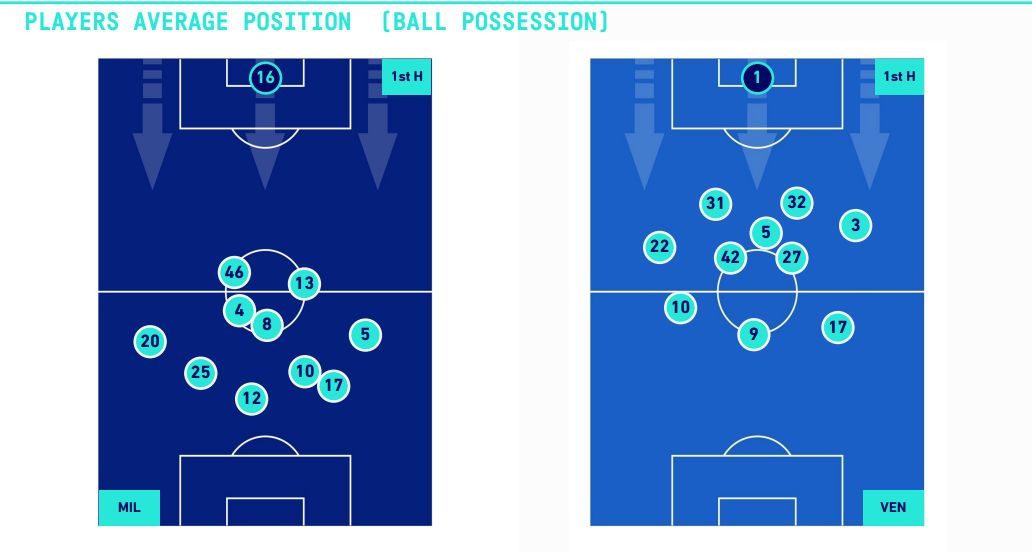 The dominance is also reflected in the average defensive line, as Milan were sat nearly 20 metres higher up the pitch than Venezia on average. It could be that 59.27m is one of the highest lines recorded this season. 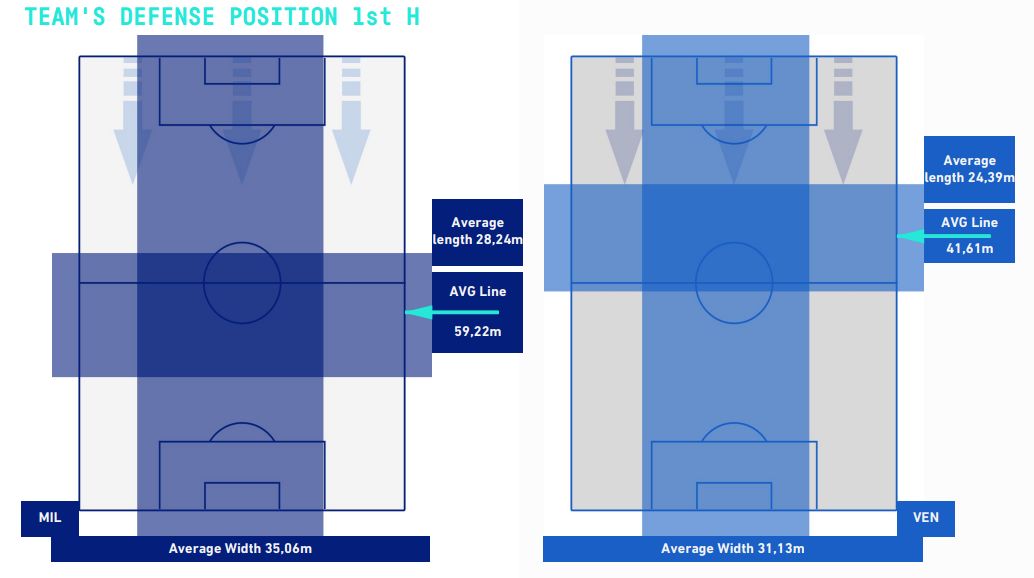 Finally, we come to another area we criticised Milan last season and that was an over reliance on the left side. Yes the majority of touches are still on that side, but there is much more variation to the build-up. The more balanced Milan can become the better.

Also, for those who deem Rebic to have been anonymous, he was once again the leader in touches in the opposition’s final third, showing an involvement in build-up play. 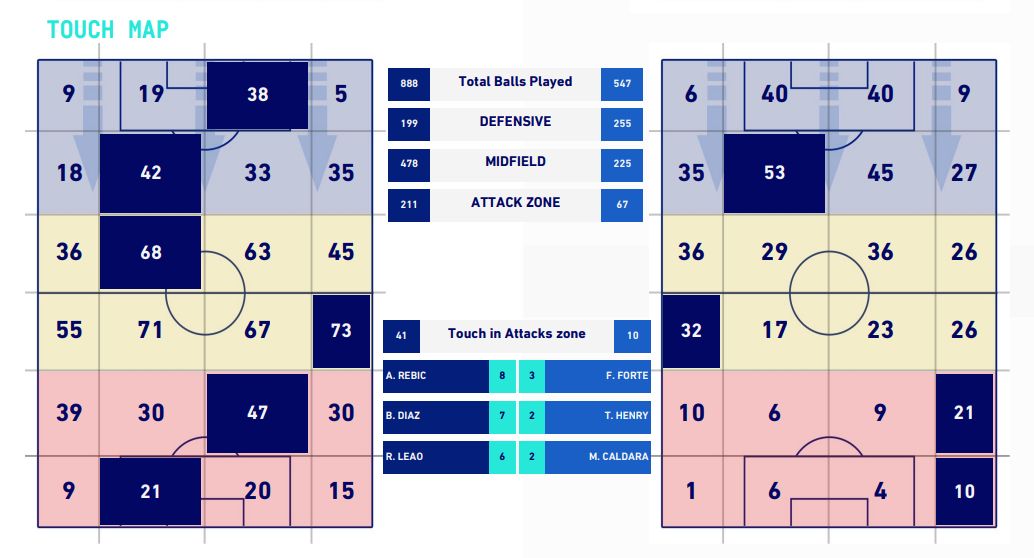 Far from one of the classics that San Siro has seen in its 95-year history, but with Spezia then Atletico Madrid and Atalanta to come, the rotation was needed and ultimately three points was the aim regardless of how silky or smooth the performance was.

Due to a lack of depth some players have been working overtime this season, so rotating three of the back four plus one in midfield and one in the trident was risky, though the desired result came through the quality and intensity of those players who still managed to get a rest of sorts.