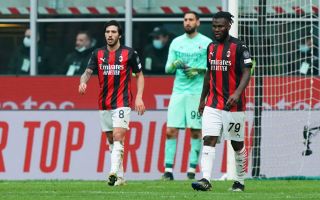 Tuttosport: Analysing the Calhanoglu, Romagnoli, Tonali and Kessie situations and their future at Milan

There are four players who face uncertain futures at AC Milan and this morning’s edition of Tuttosport has analysed each of them.

The paper (via PianetaMilan) begins with Hakan Çalhanoğlu, who currently receives €2.5m net per season and his agent initially asked for €7m net to extend. Milan, on the contrary, started with an offer of €3.5m plus bonuses and now that figure is around €4m. There is still no agreement but one is approaching, while the player is happy in Milan, and Stefano Pioli would like him to stay, but a top four finish will be key.

Then there is the issue of Alessio Romagnoli’s contract that must be resolved, as his current deal runs until 30 June 2022. His agent, Mino Raiola, would like a substantial increase in the his salary from the current €3.5m net per season, but the prospect of him not being a starter – especially if Milan buy – could see Raiola to look for another solution and the club would not oppose his sale for the right price.

Next there is Sandro Tonali, who has struggled to establish himself at Milan, in a more ambitious team and with a different game system than the one he was used to. Milan have invested a lot: a €10m loan fee and an option to buy of €15m plus €10m in possible bonuses. His performances have raised questions that the Rossoneri could snub signing him, but the huge expense for the loan and the esteem that Tonali has means he will remain, Champions League permitting.

Finally we come to Franck Kessié, whose contract with the Diavolo will expire on 30 June 2022. He is an essential player and his agent George Atangana knows this, having requested his client’s salary go up to €5m net from the current €2.2m. A huge raise, but there is time and the will to find an agreement.