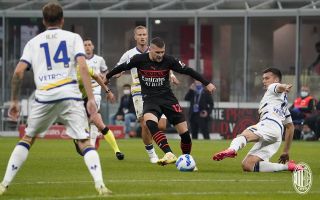 Tuttosport: Another key Milan player at risk of missing Porto game through injury

AC Milan seem to be cursed at the moment and they may be without another key man for Tuesday’s game against Porto, a report claims.

With Mike Maignan, Theo Hernandez and Brahim Diaz definitely out there is a chance that Ante Rebic too will have to sit the game out as he sustained a physical problem in last night’s win over Hellas Verona. The winger was unable to stay on the pitch and had to ask to come off, with Leao taking his place.

According to this morning’s edition of Tuttosport (via MilanNews), Rebic has suffered a sprained left ankle and in the next few hours it will be understood how bad the sprain is and whether he has a chance of coming back for Tuesday’s game.

Rebic struggled in Friday’s training session but he gritted his teeth and was out there from the start against Verona, but inside 35 minutes he got hurt and asked for a substitution. Pioli hopes that it is nothing serious and that he will be able to get him back as soon as possible.