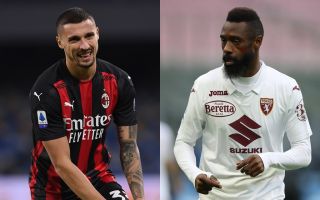 Tuttosport: Axis emerges between Milan and Torino as three players are involved

It’s no secret that Milan are looking to bring in a centre-back this month, and it even seems like they could reinforce the midfield as well. Currently in first place, they want to stay there for as long as possible.

As reported by Tuttosport (via MilanNews), Torino are also looking for a midfielder and would be more than happy to sign Rade Krunic, who hasn’t had the best of luck at Milan thus far. Therefore, an axis could come to life between the clubs.

Stefano Pioli would like to keep the Bosnian international, but if a replacement is found, they could let him leave this month. The replacement could be Soualiho Meité, the 26-year-old Torino midfielder, as the newspaper states.

However, another solution is also mentioned, seeing as the Rossoneri are looking for a centre-back above all. Ozan Kabak and Nikola Milenkovic are the profiles on their radar, but they also cost a lot of money.

Therefore, Milan could turn to Nicolas Nkoulou, whose contract with Torino will expire in the summer. Paolo Maldini could offer Krunic on a loan with an obligation to buy, which would be slightly discounted, in exchange for getting Nkoulou early.

READ MORE: Positive news for Milan as winger should be ready for Benevento clash