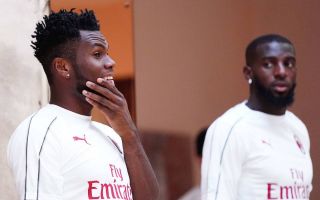 Tuttosport: Bakayoko, Adli and Tonali’s improvement – Milan may be preparing for Kessie exit

AC Milan have made moves to reinforce the midfield during the current window and it could be a preparation for Franck Kessie’s exit, a report has speculated.

Tuttosport (via NotizieMilan) writes that Milan have managed to find an agreement with Bordeaux for the purchase of Yacine Adli after weeks of negotiations with the Ligue 1 side, and interestingly the 21-year-old will remain at Bordeaux on loan until next summer.

According to the paper, this purchase may have been made in view of Franck Kessie’s farewell at the end of next season. Obviously the Ivorian has become almost irreplaceable for the team, but the improvement of Sandro Tonali, the arrival of Adli and the two-year loan (plus possible permanent signing) of Tiemoue Bakayoko could make his farewell much less bitter.

Kessie’s contract expires in 2022 and after reports suggested initial optimism over a renewal, that seems to have faded and another difficult negotiation appears to be on the cards.