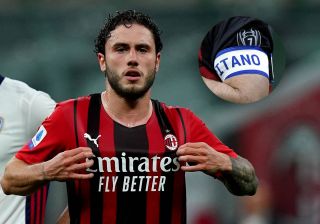 As Gigio Donnarumma has decided to leave the club at the end of June, Milan are looking for a new vice-captain and several names have been mentioned. One of them is Davide Calabria, who was great this past season.

The right-back certainly bounced back from what was a disappointing 2019/20 season, sitting on the bench quite a lot. Now, he’s considered one of the Rossoneri’s best players and the captain’s armband isn’t a remote possibility.

As reported by Tuttosport (via MilanNews), Calabria came through the youth ranks of the club and has also been an important player lately. Therefore, he could be the new ‘symbol of Milan’, as Donnarumma was this past season.

In addition to the goalkeeper, Alessio Romagnoli could also leave and that would be that Milan would have to find a new primary captain. Calabria will surely be one of the candidates, but there are a few others too.