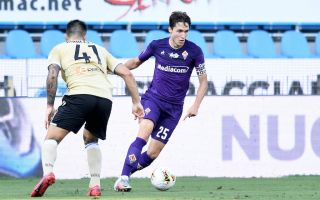 AC Milan are continuing to dream of making one big signing in the attacking department, a report claims, and the main name is Federico Chiesa.

According to Wednesday’s edition of Tuttosport (via MilanNews), a real negotiation has not yet begun between Milan and Fiorentina, but it must be said that Chiesa really likes the idea of working with head coach Stefano Pioli and moving to the San Siro.

Pioli would like the 22-year-old to be in the squad for next season and the club will do everything to try to please him, even though everyone knows that it will not be easy to convince Fiorentina president Commisso to sell him under the conditions that the Rossoneri would like.

Commisso still wants €70million to sell his prized asset, a monstrous figure that appears unattainable for Milan, but with the inclusion of a technical counterpart, something could change.

Fiorentina have long appreciated Lucas Paqueta, for example, an outgoing player that Milan would gladly include in the negotiations. If La Viola were to accept the insertion of the Brazilian into the deal – valued at €25m – it could have some chance of going through.

This would be only the first step though, the paper adds, because there is another €45m needed to get to the request of Commisso. That is why Milan are thinking about a Tonali-style negotiation: a high cost loan and then an option or an obligation to buy.

Chiesa, for his part, has always been a Milan fan and therefore he too would be very happy to wear the red and black shirt.