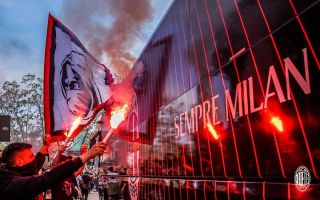 Tuttosport: Curva Sud will be present at Milanello tomorrow to support Milan players

Milan need all the energy they can get as an important encounter with Atalanta awaits, the outcome of which will decide the Champions League race. And just like before the Juve clash, the Curva Sud will show their support.

Ahead of the game against the Bianconeri, the Curva Sud was present at Milanello as the team bus left for Turin. It was an important boost for the players which then led to the big 3-0 win at Allianz Stadium.

As reported by Tuttosport (via MilanNews), the fans will do the same for tomorrow’s game, as the players will leave Milanello in the morning. With stadiums closed, this is the only way for the fans to show their support.

Hopefully, it will give Stefano Pioli’s men that extra boost to secure what would be a huge win. Not only would they secure Champions League, but they would also finish the league in second place with a win tomorrow evening.

READ MORE: Shevchenko urges Milan to keep Pioli even without UCL: “It shouldn’t be thrown away”