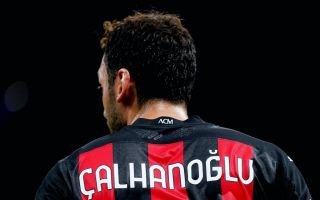 Tuttosport: Day of truth in Calhanoglu renewal saga arrives – the latest on offer and demand

The AC Milan management are set for a crucial meeting with agent Gordon Stipic to try and work out Hakan Calhanoglu’s future, a report claims.

According to Tuttosport (via MilanNews), the long-awaited face-to-face should take place in the afternoon, with Paolo Maldini and Ricky Massara the ones conducting talks with Stipic.

It is a delicate situation as Calhanoglu’s contract is set to expire next June and the player has declared a desire to obtain a large increase in his salary, but the paper claims that Stipic will be less aggressive than a month and a half ago.

At that time he asked for no less than €7million net per season to renew, while today he should lower his claims given that his client still does not have other concrete proposals on the table.

Milan are ready to offer a salary of €3.5-4m per year but they will not go above that, given the economic problems that have hit all football clubs after the pandemic.

Calhanoglu who has always made it known that he wants to stay with the Rossoneri for a long time, but it will all come down to the talks that take place today at Casa Milan.

The Rossoneri hope to find a principle agreement as soon as possible, though Milan already has several names in mind to replace him such as Dominik Szoboszlai of Red Bull Salzburg and Papu Gomez of Atalanta.