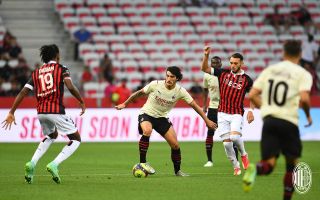 Sandro Tonali will be hoping that the second year marks his full adjustment to being an AC Milan player, and the signs from preseason are encouraging.

According to Tuttosport (via MilanNews), Tonali did everything to return to the Rossoneri this summer while Milan and Brescia were negotiating over the restructuring of the deal, even taking a salary cut in the end to push through the operation. His first season at Milanello was perhaps not as good as hoped, but expecting a young man to make a seamless transition to a big club may be naive.

In the friendly against Nice on Saturday, Tonali appeared to show clear growth. He struggled in the first part of the match, but showed an excellent performance overall against an opponent of a good level who are much further ahead in their preseason preparation.

Pioli expects a lot of the former Brescia man and is following his development closely. He will be a fundamental pawn for Milan’s season, especially when Bennacer and Kessie leave for the Africa Cup of Nations, and for Tonali he will be hoping that the second season at San Siro marks a breakout of sorts.