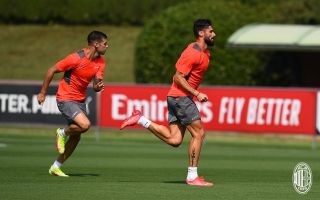 Tuttosport: From emergency to abundance – Pioli can count on a full attack vs. Liverpool

What a difference a few days makes. Not long after having zero strikers available, AC Milan head coach Stefano Pioli can now count on pretty much a full attack.

As Tuttosport reports (via MilanNews) the abundance of strikers will force Pioli to make some difficult choices in the upcoming games against Liverpool and Juventus, both of which are away from home. Zlatan Ibrahimovic is back at 100% and made his mark during the win over Lazio, but whether he will start tomorrow night at Anfield is a decision still to be taken.

Olivier Giroud is fighting for a spot too having witnessed the victory against Lazio from the stands of San Siro after testing negative for Covid. The Frenchman knows all about playing against Liverpool and could come on during the game.

Ante Rebic showed his ability as a centre-forward as he fought well against Lazio in that position, providing two assists, but it seems Pioli still wants him as a winger along with Rafael Leao. Pietro Pellegri, meanwhile, was left out of the squad for the group stages.