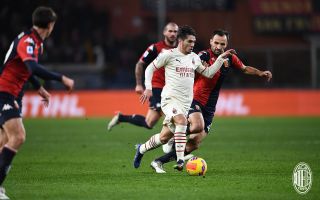 Brahim Diaz was back to his dynamic best during last night’s win over Genoa but his performance still wasn’t enough to earn man of the match from Tuttosport.

The newspaper (via MilanNews) have published their player ratings this morning and they have given a score of 8 out of 10 to Junior Messias who was the best player on the field, netting a goal either side of half time to make it three in three for the Brazilian.

There was a very positing judgment on Brahim Diaz too as the Spaniard got a 7.5 for ‘sowing panic’ in the Genoa defence and only missing a more clinical edge to his game. Scores of 7 were given out to Mike Maignan, Sandro Tonali and Zlatan Ibrahimovic by the paper.

Pierre Kalulu, Fikayo Tomori and Franck Kessie were all deserving of a 6.5, while Theo Hernandez and Rade Krunic got a 6 as did Matteo Gabbia, Alessandro Florenzi and Pietro Pellegri off the bench.

READ MORE: Messias believes he ‘deserves’ to be at Milan and insists: “The time has passed to talk about fairy tales”