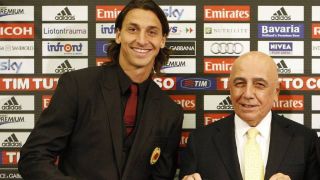 Zlatan Ibrahimovic is seriously considering playing for Silvio Berlusconi’s Monza next season, according to a report.

Ibrahimovic launched into a startling tirade earlier in the week stating that he is unlikely to remain at AC Milan because he is ‘practically playing for free’.

As a result, Tuttosport (via MilanLive) confirms that he is almost certain to leave, but it may be a surprise club that he ends his career with.

It seems that the Swede is seriously considering joining Monza in Serie B. Going down to the second tier would not be a problem, as the important thing for the 38-year-old is to compete and win.

His statements say it all: “Galliani told me that my real Milan is 11 km from Milano. I like it, so a sports director thinks. He must be persistent, he must make you understand that he wants you at all costs.”

Ibrahimovic appears increasingly tempted by the idea of ​​returning to work with Galliani and Berlusconi.