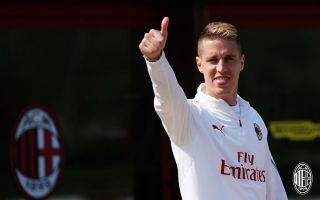 A new hypothesis has emerged regarding the future of Andrea Conti as he could now see his contract terminated, according to a report.

The full-back has been out of favour for a while now having joined amid much excitement from Atalanta back in 2017, but his four-year spell with the Rossoneri has been plagued by injuries and general poor form, and he has not been included in the last three matchday squads including the last two preseason games and Monday night’s Serie A opener.

According to the latest from Tuttosport (via MilanLive), the defender was being touted for a potential return to Atalanta but they have instead opted to go for Davide Zappacosta, who officially arrived from Chelsea.

Cagliari and Genoa are both looking for reinforcements for the right defensive lane and could seriously think about Conti, while to facilitate such a possibility the paper claims that a mutual termination of his contract is not to be excluded.

Milan could free Conti by releasing him from his existing contract, which will expire exactly in June 2022, and while the defender asks for severance pay that does not make him lose anything economically, there will be time to discuss.

READ MORE: ‘Deal will go through’ as Milan conclude meeting with agents of Chelsea outcast