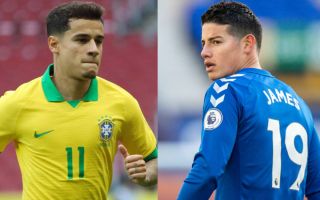 As seems to have happened every day for the past few weeks, a list of names who could potentially replace Hakan Calhanoglu has emerged.

According to Tuttosport (via MilanNews), the hunt for a new playmaker has been on for several weeks now, but it is a choice that the Rossoneri management know they cannot get wrong and that is why a lot of consideration and reflection is happening at the moment.

Stefano Pioli has requested a quality player able to tie the game together, to assist the attackers and obviously also score some goals. In addition to this, Milan are looking for an attacking midfielder who also has some international experience, to help the younger players especially in the Champions League.

The paper claims that James Rodriguez of Everton and Philippe Coutinho of Barcelona have been proposed to the Diavolo by their respective agents. The dream of many Milan fans is Isco of Real Madrid, while Nikola Vlasic of CSKA Moscow continues to be pushed by the Russian media.

Finally, Josip Ilicic of Atalanta is an affordable option at €5-6m who knows the Champions League and could be an experienced reinforcement, so his candidacy has not gone away just yet.