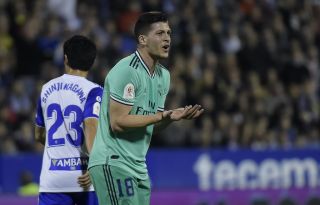 AC Milan have no interest in signing a new striker this summer despite suggestions that Luka Jovic is a target, according to a report.

Pioli stated during an interview with DAZN earlier in the week that he feels he is well stocked in the attacking department thanks to the positive signs shown in preseason by Lorenzo Colombo.

However, there are sources that believe Milan will see what opportunities are available late in the window to give Pioli some help in the forward department, with Luka Jovic arriving on loan a possibility not to be excluded.

A report from Tuttosport (via MilanNews) on Friday though claims that while Jovic would be an excellent deputy to Ibrahimovic for the 2020-21 season, the Rossoneri management have no plans at the moment to sign another striker.

This could be perceived as a gesture of faith in Lorenzo Colombo, or a nod to the fact that both Ante Rebic and Rafael Leao can play there if needed.