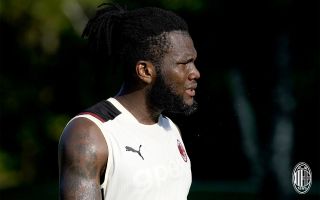 Tuttosport: Kessie rejects latest €32.5m offer with Milan unlikely to raise – he could leave for free

Franck Kessie is gearing up for a return to action, but in the background speculation about his AC Milan future continues to rumble on.

Tuttosport (via MilanNews) writes how the situation is becoming more and more uneasy for fans and the management because Kessie’s renewal is slow in arriving, and the more the days pass the more the fear grows that another Donnarumma or Calhanoglu situation could occur.

The Ivorian midfielder seemed to put his future beyond doubt with his words while at the Olympics with the Ivory Coast, stating: “I’m proud to have chosen Milan and it’s not my intention to leave. In fact, I want to stay forever. When I get back from the Olympics I will fix everything. There will be no problems, I always keep my word. The club has always known that my will is to stay in the Rossoneri.”

These are words that, after several weeks, have not yet been followed up by a signature. The player has rejected the latest offer from Milan of a five-year extension at €6.5m net per season, which is therefore a total of €32.5m. It is unlikely that Milan will raise this bid, so the risk of losing another player for nothing definitely exists.

On Sunday against Lazio Kessie will return to the field after having missed the first two games of the season due to injury, and it will be very interesting to see how the fans react when his name is called.