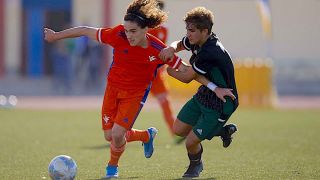 AC Milan are one of the clubs in the running to land Valencia winger Fabio Blanco Gomez, according to a report.

Mundo Deportivo reported yesterday that virtually all of Europe’s elite clubs are interested in the 17-year-old, who is out of contract in June. Barcelona and Real Madrid are big admirers of the right winger, who plays for Valencia’s U19 side, as are Manchester City, Manchester United, Chelsea, Juventus, Milan, Bayern Munich and Borussia Dortmund.

Now, an update has arrived from Tuttosport (via MilanNews) confirming that in Geoffrey Moncada’s notebook the name of Fabio Blanco Gomez is circled, as the club aim to focus on young talent for the future. However, half of Europe are fond of the teenager and in addition to Milan there are Juve, Dortmund, Eintracht Frankfurt, Marseille, Real Madrid and Barcelona after him.

The player seems set for a bright future, having appeared for the Spanish national team at U16 level.