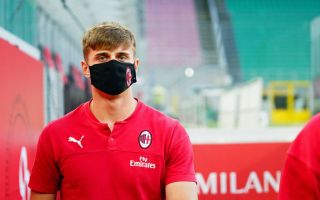 AC Milan are happy with the development that Lorenzo Colombo is making in his latest loan spell and the future for him has already been mapped out, a report claims.

Tuttosport (via MilanNews) reports how Milan decided to let Colombo leave on loan to SPAL in the summer to allow him to play continuously and thus allow him to continue his growth, with Zlatan Ibrahimovic and Olivier Giroud being the first two options for the centre-forward position and Pietro Pellegri the back-up.

The Italy U21 international has scored 5 goals in the first 13 matches of the Serie B season and while he is focused only on the present, he knows that Milan are keeping an eye on him for the future, considering him a part of the department moving forward.

When his loan expires at the end of the season, Colombo will sit down with directors Paolo Maldini and Ricky Massara to decide what will be best for his future. Much will also depend on what Zlatan Ibrahimovic decides to do and also on what moves Milan will make on the market as the club are looking at Andrea Belotti and Julian Alvarez as possible targets.

For Colombo the target is simple: he must continue his growth in the best possible way and force his way into Milan’s plans. After all, at 19 years of age he certainly has time on his side.